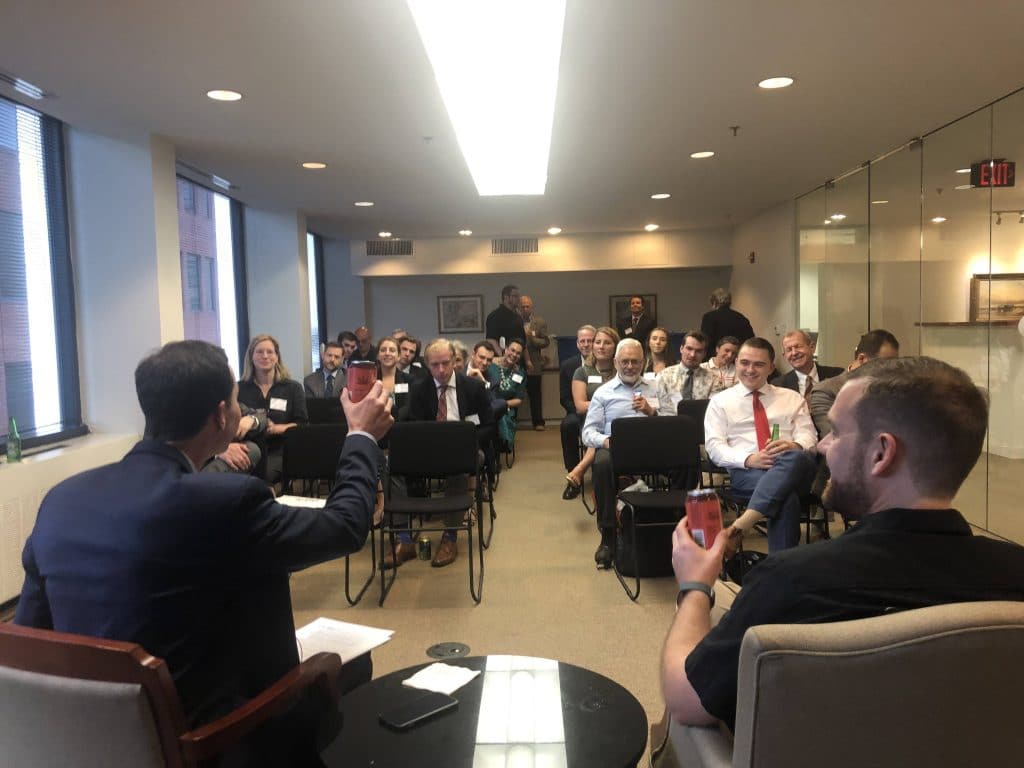 I’ve got a great idea.  Go out and get yourself an Atlas Brew Works Blood Orange Gose (I had one while moderating our free speech event yesterday—it’s delicious!), come back to this blog, and click here to listen to NCLA’s Lunch & Law event (Happy Hour Edition, thanks to the subject matter).  You’ll have a tough time deciding which is better—the audio or the Atlas beer!  Spoiler alert: Most of the laughs were at the expense of an overbearing regulatory scheme still anchored to antiquated prohibition era suspicions and anxieties about alcoholic beverages.

It wasn’t all fun and games, though.  Encroachment on our freedom of speech is a serious matter.  We addressed weighty constitutional issues with the help of renowned constitutional lawyer Alan Gura of Gura PLLC, and we addressed the practical implications of federal and state regulations on the business of craft brewing with Justin Cox, CEO of Atlas Brew Works in Washington, D.C.

“Chilling” speech is such a commonplace metaphor that it’s almost lost its meaning.  We should remind ourselves that it isn’t a hollow catchphrase—it describes a consequence of government-imposed burdens on your right to express yourself.  Even relatively minor burdens on speech have significant ramifications because they undermine the foundation of a free society.  In the words of Justice Benjamin Cardozo, freedom of speech “is the matrix, the indispensable condition of nearly every other form of freedom.”  That’s why the Framers saw fit to emphasize its importance in the First Amendment: “Congress shall make no law … abridging the freedom of speech[.]” Justice Arthur Goldberg has explained that “chilling,” therefore, refers to the deterrent effect of government action on “the free exercise of constitutionally enshrined rights of free speech, expression, and association[.]”  When the government chills our speech, we are reluctant to speak freely, which causes a chilling ripple effect on our most fundamental rights.

As we discussed last night, though, the regulatory regime that requires brewers, vintners, and distillers to apply for certificates of label approval (COLAs) before putting their product into interstate commerce isn’t just an incidental burden on speech, it is a prior restraint on speech that manifests itself as an unconstitutional speech license.

According to Justice William Brennan, government agencies “bear a heavy presumption against … constitutional validity” of their use of prior restraints on expression.  Justice Harry Blackmun reasoned that “[a] prior restraint, by contrast and by definition, has an immediate and irreversible sanction.  If it can be said that a threat of criminal or civil sanctions after publication ‘chills’ speech, prior restraint ‘freezes’ it at least for the time.”  Moreover, “prior restraints on speech and publication are the most serious and the least tolerable infringement on First Amendment rights.”

Listen to the recording of our event and learn more about Justin’s business concerns regarding prior restraints on speech, Alan’s First Amendment arguments that could vindicate Justin’s right to free speech, and my  somewhat radical take on the First Amendment’s unequivocal command that “Congress shall make no law.”

We want our beer chilled, not our freedom of speech!  Cheers!