Going off the Rails: The CA High-Speed Rail Authority 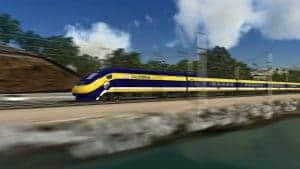 Billions of dollars over budget. Years behind schedule. Hundreds of acres of land taken from Central Valley farmers, who are still waiting to receive their compensation. How did a project to build America’s first high-speed railway become such a wreck? The answer is simple: a lack of oversight exercised by the governor and legislature over an agency that holds broad delegated power.

In 2008, California approved Proposition 1A, a $9.95 billion bond measure to fund the Authority’s construction of the high-speed rail. While Prop 1A required a committee of “financial…and high-speed train experts” (not the legislature) to approve the Authority’s funding plans (not construction or design plans) before handing over the bond funds, Prop 1A failed to provide guidance on how the Authority was to construct the rail. Rather, Prop 1A gave the Authority a single, broad goal: build a train that travels from San Francisco to Los Angeles in 2 hours, 40 minutes at speeds no less than 200 MPH with minimal environmental impact.

With this broad directive and virtually no guidance or oversight, the Authority doomed the train before it even started. The Authority began construction of the rail in 2013 – but with only 15% of the design plan completed. Contractors have run into problems with the train’s proposed route, acquiring land, and working with local utility companies to clear a path for the train. As a result, the Authority has gone back to farmers multiple times to take more land than was originally condemned and has developed into a venture operated by consultants unaccountable to the people. The Authority’s private consultants complete virtually every aspect of the job: hiring contractors, managing contracts, creating design plans, etc. State Auditor, Elaine Howe, has even acknowledged, “the State’s best interest may not be the highest priority” for the consultants.

Governor Gavin Newsom has not taken any action on the matter other than to submit a statement declaring that he is “getting rid of a lot of consultants” and pledges “to hold [the Authority] accountable.” Whether Governor Newsom acts on this pledge, however, remains to be seen. His announcement shows that the governor has the power to restructure the Authority and hold it accountable. Just because the governor has the power to order reform, however, does not mean the person occupying the position of the governor will exercise that power. Simply look to the previous administration under Governor Brown. Previous audit reports revealed the same poor planning and unaccountable management structure that exists now. Predictably, the Brown Administration failed to act.

Governor Newsom recently asked, “How did we get away with this?” The answer is clear: former California governors and the legislature failed to exercise vigilant oversight. With Governor Newsom’s recent pledge, we’ll see if the administration exercises more oversight over the Authority. The tale of the California High Speed Rail Authority epitomizes an all too familiar story about administrative agencies: when the legislature and executive fail to exercise vigilant oversight over an agency that is delegated broad power, the agency sprints like a runaway train, derails, and keeps chugging along as it pleases.