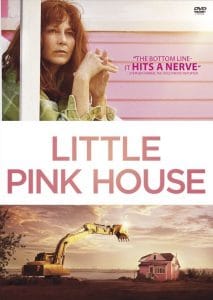 New Civil Liberties Alliance recently hosted a showing of Little Pink House, a 2017 fact-based film dramatization of the events leading to the Supreme Court’s 5-4 decision in Kelo v. New London.  When that case was handed down in 2005, immediate, nationwide outrage rocketed it to the dubious distinction of being the most hated Supreme Court case of its time.

Scott Bullock who argued the case, was at the NCLA showing, representing the Institute for Justice (IJ) team of Chip Mellor, Dana Berliner and John Kramer, key players in IJ’s extraordinary effort to reinvigorate the “public use” requirement of the Constitution’s takings clause.   The film’s moving, at times wrenching, portrayals of the heroes, villains, and ordinary Connecticut citizens who mobilized to challenge the unfortunately widespread (and still ongoing) practice of eminent domain abuse is an object lesson in the costs, burdens, stress, displacement and depletion associated with public interest litigation.

I have closely watched this case since 1998, when I briefly considered representing one of the landowners who consulted me right at the time I had hung out my shingle in Connecticut.  (I correctly foresaw the case would bankrupt a solo practitioner and referred the potential client to IJ.)  I knew the players, heroes and villains, had toured the homes and Ft. Trumbull neighborhood and can attest it was a solid working-class neighborhood and not blighted.   I also knew the lawyers, judges, statutes and legal culture in which this remarkable challenge unfolded. It was sobering and poignant to recall those events of 15 years ago filtered through the simplifying lens of movie-making.

Sunlight is the great disinfectant

The aspect of the story that stuck with me most from watching the movie was how essential—and how threatening to the government— was media and press coverage.  Publicity alone allowed IJ to make this one case rise from the wastelands of eminent domain abuse and become an enduring symbol across the nation.

I vividly recall that virtually no one in the Connecticut bar gave the case even the remotest chance of success.  “They do this all the time,” said the lawyers, that sad refrain of the wised-up legal fraternity.  Not only did the lawyers not get it, neither did the judges.  In his recently published memoir, Justice John Paul Stevens, author of that most hated opinion of its time, evinces a kind of stunned disbelief that the case could cause such a furor.  Not only did the U.S. Supreme Court get it wrong by one vote, but so did the Connecticut Supreme Court in a 4-3 squeaker.  Judicial cluelessness is perhaps best personified by the astounding, admirable, but oh-so-way-too-late admission by Connecticut Supreme Court Justice Richard Palmer who afterwards publicly expressed regret that he voted to support the taking.  In a remarkable possibly unprecedented moment of grace, Justice Palmer later personally apologized to Susette Kelo.  This never happens in real life, folks—but it did.

That the judges and the lawyers were the most clueless of all brings us to the heart of the  problem.  For litigation, while public in name, is private in essence.   Sure, reporters and media sometimes pick up on a story, or cover a hearing, but the life of a case takes place largely in private conference rooms, judicial chambers, unreported hearings with no one but the parties in attendance, appeals summarily denied on the papers and all of the other maze-like twists of legal process.  The abusers of power know and manipulate that.   A key, infuriating scene early in the movie occurs when a New London city councilman announces the “final” agenda item about a children’s pageant, and then when the chamber empties out, including New London’s sympathetic mayor, the councilman proceeds with the final, final vote—to bulldoze Kelo’s neighborhood while people are still living in their houses.  This happens all the time as the legal cognoscenti knows.  Another maddening meme was the insistence by the political appointee who took the homes that such despotic measures were just “economic development going hand-in-hand with social justice.”  Such nonsense and abuse of power thrives and festers in darkness.

The worst advice about lawyering—ever

Early in my career as a young lawyer in Connecticut, I was repeatedly given the following advice: “You don’t try your cases in the press—“No comment’ or ‘we do not comment on pending litigation’ are the only permissible and ethical responses to reporters.”  Time and again this was drummed home by supervising partners, in bar gatherings and conveyed to clients, who I often privately thought might benefit from some public airing of the legal process.   So, when midway through Little Pink House, New London’s lawyer upbraids Scott Bullock for having the temerity to publish about his work on behalf of the Ft. Trumbull residents—and enraged, accuses him of being unethical by trying his case in the press, I didn’t bat an eye.  This may—and should—seem absurd to a modern reader, but it perfectly captures the pervasive and pernicious culture of secrecy that dominates our legal proceedings even today.

The only difference between Susette Kelo’s case and the thousands of like abuses of administrative power that dot the nation, is that IJ went to the mats on media from the beginning.  George Will wrote about the case early on, and the IJ lawyers saturated the press with the abuses of power by the New London Development Corp, including intimidation tactics such as wrecking homes next to Susette Kelo’s and having the temerity to charge the holdouts rent for occupation of their own homes.  It was the media coverage that made all the difference.

While the lawyers and judges I practiced with in Connecticut didn’t get it, the public sure did.   And it was public outrage—not court proceedings—that led to the political and judicial about-faces on takings that followed in the wake of the Kelo decision.  Only when the public understood that this story was about government forcing a working-class homeowner from her home because the political interests favored a wealthier development that would provide more tax revenue, did the public get “woke” to why the Founders had prohibited such takings.  I remember a powerful post-Kelo editorial that noted that no one was taking waterfront homes in Greenwich to develop luxury condos for politically favored corporations.

The most powerful message of the film is the power that a determined litigant and her committed lawyers can wield if they only bring sunlight to the abuse of power and freely publish about their work.  The most powerful image of the film is the closing shot of the Fort Trumbull neighborhood today—an empty, blighted wasteland.   Some social justice.