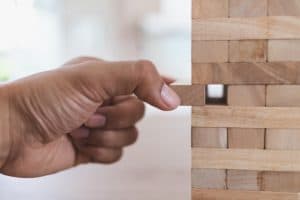 Ah, the games bureaucrats play.  They most often resemble Twister, of course: How well can you contort yourself to follow an agency’s myriad of guidance and regulations?  But many of their games are more insidious, implicating fundamental rights including freedoms of speech and association.  Case in point: the California Attorney General’s game of Civil Rights Jenga, where a state administrator’s executive fiat requires nonprofits to divulge the names, addresses, and donation amounts of their top supporters.

If you’ve never played Jenga, it’s a panic attack-inducing game that starts out deceptively Zen.  The game consists of 54 rectangular wooden blocks.  The blocks are neatly stacked crosswise three on top of three, into a remarkably stable tower 18 levels high.  Players try to remove one block at a time from the bottom and relocate the blocks on top, without knocking the stack over.  So, throughout the game, players are undermining the solid foundation of the tower, while precariously rebalancing the exposed blocks on top.  By game’s end, players hold their breath because the slightest breeze or involuntary quiver can bring the once-orderly wooden tower down into a pile of haphazard kindling.

The Constitution and Jenga are more similar than they may seem at first blush.  The Constitution neatly organizes civil rights into a tower of interdependent freedoms, very much like the wooden blocks in a Jenga game.  Foundational liberties, such as those in the First Amendment, keep the tower stable.  But when a civil right is removed from the base, all liberties secured by the Constitution teeter on the brink of collapse.

It’s a perilous game—this Civil Rights Jenga—but the United States Supreme Court can shore-up the foundation of our civil liberties if it hears the case of Americans for Prosperity Foundation (AFPF) v. Becerra.

And the Supreme Court should take up the case, in part to reaffirm NAACP v. Alabama (as I argued in my October 2018 op-ed on Townhall.com), but also to emphasize how critically important each civil liberty is, in relationship to the others.  This is especially true for people who hold unpopular minority viewpoints.

The First Amendment underscores that the government (including state governments under the Fourteenth Amendment) may not make laws that would abridge our rights to freedom of religion, speech, press, assembly, and redress of grievances.  Because our government is one of enumerated powers only, it should be apparent that rights related to these are also protected from infringement, such as the right not to speak, the right to associate, or in the case of AFPF v. Becerra, the right to privacy in one’s associations.

And while all Americans have the right to associate, this right is even more meaningful to minorities and those who espouse unpopular opinions and viewpoints.  For the socially and politically marginalized, privacy is more than a fundamental civil liberty—it’s a necessity.  Associating with like-minded or like-situated people is the best way to exercise freedom of speech by speaking with a unified voice, and—as the old adage goes—there’s safety in numbers.

Sadly, instances of violence, intimidation, and social and economic reprisals against people with unpopular viewpoints are all too common.  Whether doxxing at the University of Texas, SWATting in Wichita, or a CEO or artistic director losing their jobs or facing public shaming, the loss of privacy when expressing unpopular viewpoints can silence speech.

The United States Supreme Court recognized this danger in NAACP v. Alabama.  The NAACP Court stressed the “vital relationship between the freedom to associate and privacy in one’s associations.”  NAACP supporters had to be protected from forced disclosure of their names and addresses because they rightly feared “economic reprisal, loss of employment, threat of physical coercion, and other manifestations of public hostility.”  The “[i]nviolability of privacy in group association[,]” the Supreme Court concluded, “may in many circumstances be indispensable to preservation of freedom of association, particularly where a group espouses dissident beliefs.”

Compelled disclosure of supporters facilitates the coercive tactics applied by those who oppose an organization’s views and who are determined to use social pressure or threats to stamp out differing viewpoints.  The very real danger today is that state–compelled disclosure regimes can be combined with social media tools to coordinate social intimidation and threats of violence against a dissident organization’s supporters.  The ease with which information can now be shared—or hacked by malevolent individuals and foreign governments—makes compelled disclosures an even greater threat to First Amendment freedoms than they were at the time of NAACP v. Alabama.

Without associational privacy, can the unpopular truly exercise their right to free speech?  When state attorneys general—whether Alabama’s in 1958 or California’s in 2019—require disclosure of supporter lists, they are complicit in coercing silence from dissenting voices.  It’s shamefully illiberal.  And it’s patently unconstitutional.

Replacing the blocks to the foundation of civil rights

NCLA filed an amicus curiae brief in support of AFPF’s petition asking the Supreme Court to take up the case and overturn the Ninth Circuit.  We asked the Court to vindicate NAACP v. Alabama—one of the canonical rulings of the civil rights era—and to declare that under the First Amendment, even if the government itself is not engaging in repressive behavior, the government cannot enable private citizens’ bullying and intimidation against others who anonymously join together to express their unpopular views through an organization.

As the bottom wooden blocks of the Jenga tower are vital to the tower’s ability to balance upright, so too are the fundamental liberties that empower us to speak freely, even when our viewpoint is unpopular—or even reviled.  It’s going to take a very steady judicial hand to keep our teetering civil liberties from tumbling down around us.  It’s not too late, but the Supreme Court must decisively put the associational privacy block back among the foundational civil rights guaranteed by the Constitution, where it belongs.