Time to Clear the Fog of Agency Secrecy from the Swamp 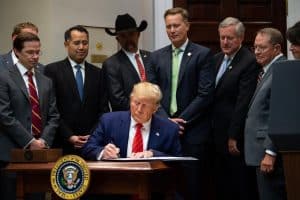 The two executive orders issued by the White House—“Bringing Guidance out of the Darkness,” and “Transparency and Fairness”—promise to start clearing the fog of faulty guidance documents issued by federal administrative agencies in the so-called Washington D.C. “swamp.” The administration should be applauded on taking a decisive step to reduce agency overreach.

Among other mechanisms to curtail bureaucratic abuse, the Executive Orders direct agencies to stop having secret or unlawful interpretations of regulations. The directive against secrecy reinforces the Freedom of Information Act, which is one of the most important legal tools Americans have for ensuring the federal government is transparent. The Executive Orders underscore FOIA and say: “we mean it.” Two examples illustrate the dire need for clearing the dark matter and secrecy that permeates federal agencies.

Take the example of the Food and Drug Administration (FDA), a notoriously opaque agency. In August 2014, during the Ebola outbreak in Africa, FDA approved the use of ZMapp, which, at the time, had not been approved for human tests. The approval was issued within one hour of receiving the emergency-use request. Under FDA’s written, published process for emergency approvals, however, FDA usually takes days, if not months, to act on emergency-use applications. While FDA’s rapid response was commendable, it also signaled that perhaps FDA did not follow its usual process in approving ZMapp.

This fact prompted a former colleague of mine to file a FOIA request asking FDA to disclose what process it used in granting approval at record speed. After all, if FDA did have a speedier emergency-use process, informing the public that such a process exists would save thousands of lives and bring much-needed medication to the critically ill. Perhaps unsurprisingly, FDA refused to disclose what process it used. This prompted a federal lawsuit. As a result, FDA begrudgingly partially disclosed the actual process it used in approving ZMapp—which, sure enough, differed from its published regulations.

The Executive Orders would require agencies like FDA to shed such secrecy. It should not take an expensive federal suit—or even a FOIA request—to prompt federal agencies to divulge its rules of procedure.

Another example from 2014 will highlight the changes the Executive Orders bring to federal–agency practices. The Federal Aviation Administration (FAA)—the DMV of the skies—is notorious for issuing “letters of interpretation,” not all of which are available on FAA’s website. This issue was exposed in the case of Flytenow, Inc. v. FAA that I litigated a few years ago.

At issue was FAA’s “expense-sharing rule”—a published regulation that allows pilots to share the operating expenses of a flight with passengers. That’s like both you and your friend pitching in gas money if the two of you are going to the same destination and want to reduce the cost of travel.

Flytenow is a silicon-valley startup that has an app that pilots and passengers can use to share expenses. But, under its clandestine interpretation—which FAA acknowledged “is not defined by regulation”—FAA shut down Flytenow in 2014 because it allowed strangers to share operating expenses. In the federal suit that followed, the D.C. Circuit deferred to the FAA’s hidden interpretation under the Auer deference doctrine and the Supreme Court declined to hear the case.

The administrative apparatus has been clogged with thousands, if not tens of thousands, of such “guidance” documents. Instead of going through notice and comment rulemaking, agencies have become accustomed to issuing guidance. These documents have settled into a thick fog of interpretations of statutes and regulations, interpretations of interpretations, and one-off “letters” to regulated parties. These guidance documents come from all possible corners of the agency. Field offices can issue these with the same authority as the agency headquarters in the Beltway. Virtually any federal-agency employee with access to word processing software can—and does—issue letters to regulated parties. All of this makes law a constantly shifting, moving mass devoid of any determinacy, and impossible to manage or navigate. Today’s Executive Orders promise to lift the fog that has dramatically reduced visibility in some areas of D.C.’s proverbial swamp.