Oh Wisconsin! It’s time for legislators to do their jobs 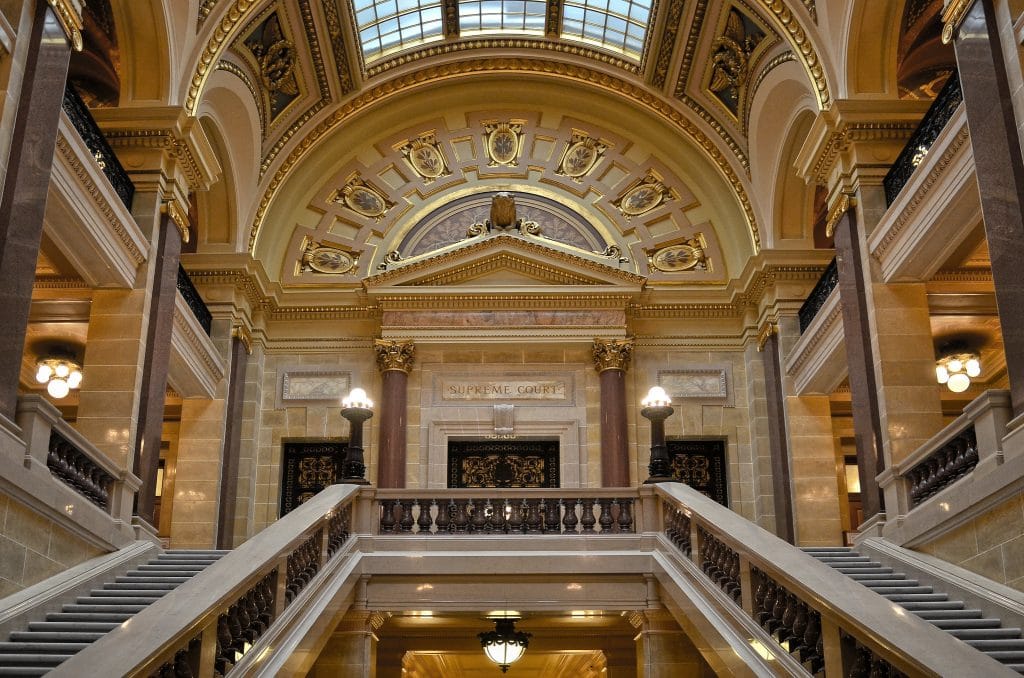 “When the tyrant first appears, he is a protector.” Plato, The Republic

On March 24, 2020, Wisconsin’s Interim Health Services Secretary Andrea Palm issued a stunningly broad order taking control of the lives and activities of every single individual and business in the State of Wisconsin under rules and conditions that she herself determined and put into effect. Emergency Order 28 exerted such sweeping controls as:

Violations of this Order were punishable as crimes. Order 28, Section 18 (“This Order is enforceable by any local law enforcement official, including county sheriffs. Violation or obstruction of this Order is punishable by up to 30 days imprisonment, or up to $250 fine, or both.”).

Think about this. If you were designing a government, knowing that communicable disease epidemics have happened throughout history and will continue to happen, would you want a single person, a bureaucrat who does not hold elective office, to have unlimited power to tell the citizens of the state what they can and cannot do upon penalty of criminal fines and imprisonment?

On May 13, 2020, the Wisconsin Supreme Court said: We. Think. Not. It held that the State of Wisconsin had not designed a government that would permit its Interim Health Services Secretary to so broadly govern by administrative fiat the lives of its citizens and others visiting the state.

Article I, Section 1 of the Wisconsin Constitution provides that all governmental power derives “from the consent of the governed” and government officials may act only within the confines of the authority the people give them. Under that Constitution, “[t]he people of Wisconsin never consented to any elected official, much less an unelected cabinet secretary, having the power to create law, execute it, and enforce it. “‘[E]ver vigilant in averting the accumulation of power by one body—a grave threat to liberty—the people devised a diffusion of governmental powers’ among three branches of government.”

The scary part is that the Supreme Court ruling was close—a 4-3 decision. The opinion is interesting, with concurrences, separate dissents, and lively disagreement on procedural and substantive aspects of the case that will occupy the legal cognoscenti for many years of publication and argument.

But its essential holding—which answers the question, who has criminal lawmaking power?—is surely correct.

Notice that the governor of Wisconsin did not put these rules into place. The Supreme Court decision announced up front that “This order [Order 28] was not issued by the Governor, nor did it rely on the Governor’s emergency declaration.” No, he delegated whatever executive power he did possess by signing a blank check to an unaccountable bureaucrat.

Rather than dissect the interstices of a complex and thoughtful bundle of decisions, as lawyers are wont to do, the important takeaway is that a state bureaucrat cannot subjectively and unaccountably rule in this fashion without herself being a lawbreaker. Few principles are more fundamental to the rule of law than the rule that only elected and accountable legislators can criminalize human conduct. That bedrock principle must never not be drained of its enduring force and power even in—or more importantly—especially in times of panic and mass hysteria.

The opinions recite shameful examples of when this rule of law was discarded in the name of public health and national emergencies. Public health was used as an excuse for the elites’ pet projects of eugenics; similarly, wartime emergencies have resulted in diaspora and dispossession of American citizens by Americans. Those decisions sit in discredited shame in the law books as stains upon the judiciary that failed to intervene in perilous times. Justice Brandeis’s dissent is cited in the court’s decision.

“Experience should teach us to be most on our guard to protect liberty when the Government’s purposes are beneficent. Men born to freedom are naturally alert to repel invasion of their liberty by evil-minded rulers. The greatest dangers to liberty lurk in insidious encroachment by men of zeal, well-meaning but without understanding.” Olmstead v. United States, 277 U.S. 438, 479 (1928) (Brandeis, J. dissenting)

Why is it that a freedom-loving country retreats into pre-enlightenment authoritarian rule whenever panic or pandemic descends upon the populace? Fear. Fear of illness or death. Fear of accountability. Fear of lawsuits.

State legislatures that have permitted the Executive branch to both define what is criminal and to enforce those new criminal standards are just as guilty of breaching their oaths to support and defend their state Constitutions.

While it is true that lawmaking is cumbersome, and subject to delay and compromise, bicameralism and presentment, that is a feature, not a bug. This means that business or personal activity that poses no significant risk of harm has a representative voice in deciding what should or should not be shut down. And do we really want to criminalize a handshake? Or, as in Michigan, lawn care that can be accomplished observing complete social distance.

Who decides what is essential? Many thoughtful observers have noted that the distinction between “essential” and “non-essential” has put millions of Americans out of work, when the proper test should have been “dangerous” (dentistry comes to mind) and “not-dangerous” such as lawn care, boating and all sorts of retail that could have adapted to curbside or low-density operations. Bike shops and auto repair shops have managed to function, whereas other businesses that could carry on in like fashion are closed—to disastrous economic effect. A legislature, with its ear to its constituents and electoral accountability, is simply a better place to make—and refine—these important distinctions. Public health officials and experts can and should be participants in that process. But they should not be czars criminalizing ordinary human conduct.

Legislatures can and must convene to decide these questions by accountable representatives who bring the voice of their constituents to the table. Legislatures can act quickly and responsibly when the political will to act is engaged. Sad to say, it is hard to escape the conclusion that the legislatures in some states want to punt this to an executive (who, in the case of Wisconsin’s Governor, punted to an acting Health Secretary) who by definition is in over his or her head, legally, professionally and politically.

In the Wisconsin case, the Interim Health Services Secretary essentially conceded there were no limiting principles to her authority, prompting the court to observe that lawmaking and “[r]ulemaking exists precisely to ensure that kind of controlling, subjective judgment asserted by one unelected official … is not imposed in Wisconsin.”

A related question is the clamoring for immunity on the part of health care providers, food chain provisioners, and others serving as “essential” industries. Governors and bureaucrats have issued orders that purport to confer immunity—but the truth is that only a legislature can effectively do that. Those other immunity “fiats” are not worth the paper they’re written on, and so constitute a cruel deception for vulnerable Americans providing essential services who rely on them.

The impulse to let the experts rule by fiat is part of a much larger political problem where Congress or its counterpart, the state legislatures, want to delegate their lawmaking powers to administrative agencies so that they don’t have to make the hard decisions about cost/benefit, risk, economic consequences and public health considerations. Or to be politically accountable. The pandemic serves the useful purpose of exposing the unwisdom of that impulse to turn it over to the “experts.”

Plato and Justice Brandeis are far from alone in observing that tyranny flourishes when the people want to be protected. Thinkers from Albert Camus writing about a plague, Voltaire, Thomas Paine, John Locke, Thomas Jefferson, Ben Franklin, C.S. Lewis, William Pitt, and any number of modern historians and political philosophers have pithy observations that say the same thing: essentially that the worst and most successful forms of tyranny are insinuated into our lives by those who claim to be acting for the people’s own good.

We have a vital gift from those who designed our system of separated powers so that governments would not fall into this recurring error. We are not helpless in the face of a pandemic and can and should decide through accountable elected governors and representatives how to react. Refreshingly, as in Wisconsin, state legislators throughout the country are suing to take back their power and accountability.

One can only hope that this terrible plague will allow us time and reflection to cherish that gift in the only way possible: by observing the separation of powers and not allowing governors or legislatures to delegate their duties to unaccountable bureaucrats. We must not let our civil liberties be another victim of this frightening pandemic. We are better—and should be wiser—than that.