Grading Agency Progress on Executive Order 13891: A Scorecard for Section 3(a) 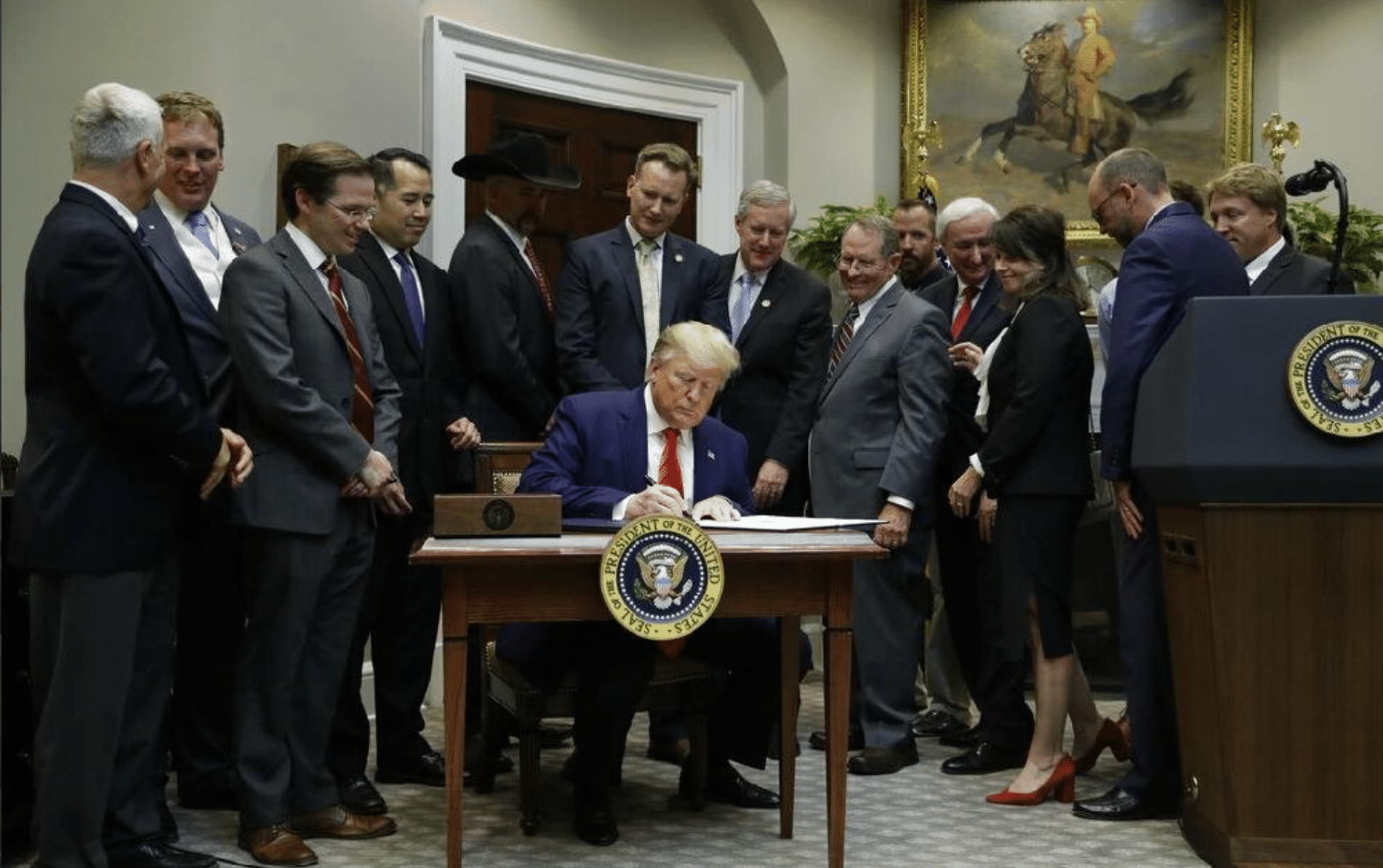 Last fall, President Trump issued two Executive Orders aimed at reining in unlawful administrative state action. Together, the orders represented a welcome change for regulated parties, who too often find themselves in regulatory agencies’ crosshairs with little notice or understanding of what, if any, law or regulation they allegedly violated.

But the Executive Orders are only as good as their implementation. Today we’re checking in on the cabinet-level agencies to see how they are implementing Executive Order 13891 so far.

The TL;DR version? Not great.

Executive Order 13891 was issued “to ensure that Americans are subject to only those binding rules imposed through duly enacted statutes or through regulations lawfully promulgated under them, and that Americans have fair notice of their obligations.” The order sets three non-discretionary mandates for agencies to implement and deadlines to act by. By February 28, 2020, “each agency or agency component shall…establish or maintain on its website a single, searchable, indexed database that contains or links to all guidance documents in effect from such agency or component” and “each agency shall review its guidance documents and, consistent with applicable law, rescind those guidance documents that it determines should no longer be in effect.” By August 26, 2020, “each agency shall, consistent with applicable law, finalize regulations, or amend existing regulations as necessary, to set forth processes and procedures for issuing guidance documents” consistent with the provisions set forth in the order.

The first mandate is relatively straightforward, under Section 3(a), requires agencies to establish or maintain “a single, searchable, indexed database” containing or linking to all operative guidance documents. The second mandate helps incentivize the first mandate’s implementation by precluding agencies from retaining or relying on guidance that is not in the agency’s database. In this way, the databases or portals are central to Executive Order 13891’s policy goals and to regulated parties’ ability to accurately identify what guidance relates to their conduct.

Maybe you are reading this you and wondering, “why does this matter?” Because, at a minimum, compliance with Section 3(a)’s mandate offers a bellwether for an agency’s desire and willingness to proactively provide Americans fair notice of their obligations under the law.

So, have the cabinet-level agencies met the Section 3(a)’s mandate? Generally, no. But the majority got close.

Determining compliance with the mandate, I reviewed each cabinet-level agency’s or agency component’s guidance website and rated them based on whether they complied (graded “Pass”), substantially complied (graded “Partial Credit”), or failed to comply with the mandate (graded “Fail”). A complying website includes a (1) single, (2) searchable, (3) indexed database of (4) all guidance in effect that is, per Office of Management and Budget’s implementing memorandum, (5) accessible from “www.[agencyname].gov/guidance.” A Passing grade is given to any agency meeting all five metrics. Partial Credit grade is given to agencies that substantially met the compliance metrics. A Failing grade is given to agencies that did not substantially meet the compliance metrics.

The infographic below highlights each agency’s grade. 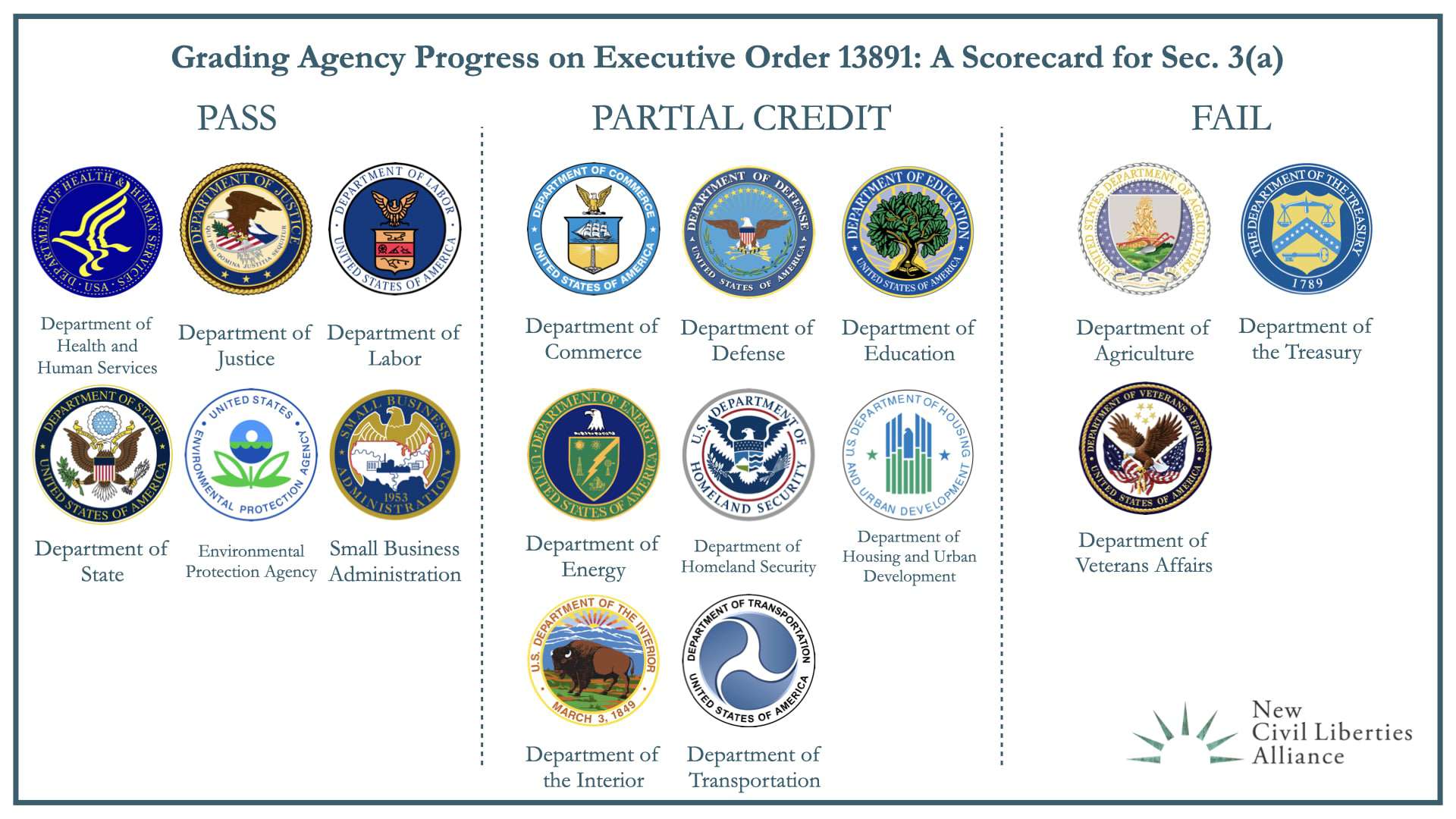 Of the 17 agencies reviewed, only six received a passing grade, the Departments of Health and Human Services, Justice, Labor, and State, and the Environmental Protection Agency and Small Business Administration.

Eight agencies received partial credit. The overwhelming deficiencies for most of these websites were either a lack of searchability or a lack of indexing. Another common issue was that while the agency—for example, the Departments of Transportation and Homeland Security—complied, their components did not—for example, the Federal Aviation Administration (not single or searchable because FAA’s portal lists and links to over 10 other databases) and U.S. Citizens and Immigration Services (no differentiation on what is or isn’t a guidance document), respectively.

Only one agency, the Department of Defense, failed at what I consider the easiest metric to meet: accessibility from “www.[agencyname].gov/guidance.” As of this writing, defense.gov/guidance leads to a 404 error page.

The remaining three cabinet-level agencies, the Departments of Agriculture, the Treasury, and Veterans Affairs received a failing grade.

Over three months after it was required to, the Department of the Treasury still has not built, or at least has not publicly released its portal, noting only that “[l]inks to Treasury and bureau guidance documents and portals will be made available here when portals are established.” Similarly, the Department of Veterans Affairs’ website exists but it lists no guidance, nor does it affirmatively state that the agency has no guidance documents.

The agencies can and should do better.