Some Thoughts on the Nomination of Judge Amy Coney Barrett 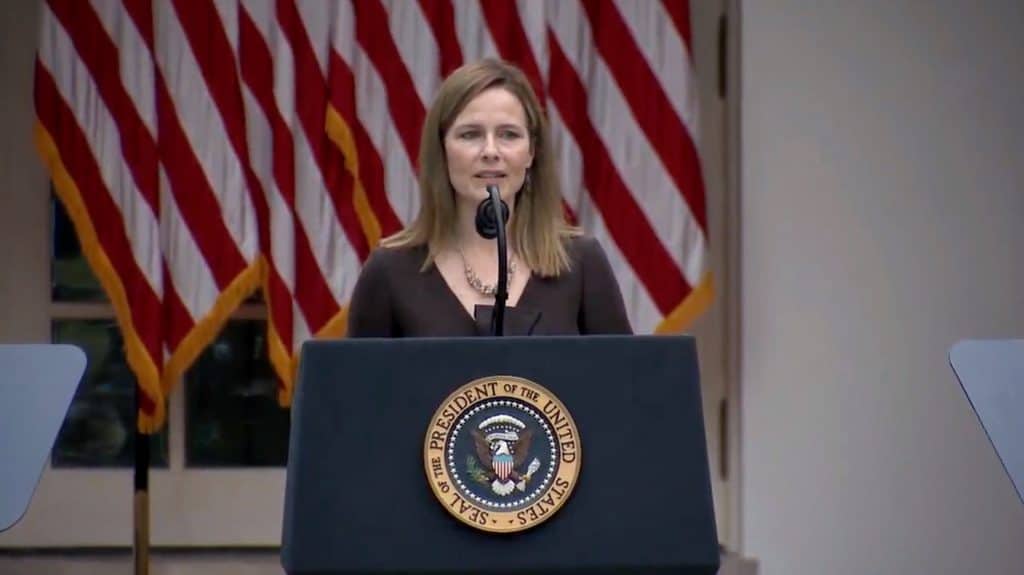 So, we have a nominee for the Supreme Court, Amy Coney Barrett, and, as with all such nominations, the prognosticators, pundits, and public want to know how this candidate will approach the issues they believe the Supreme Court is most likely to hear in coming years. Misinformation abounds. The cognoscenti know that abortion will continue to be readily available, and overturning the Affordable Care Act is highly unlikely if only because of the ratchet effect that means that once a practice or government benefit is put in place, it is exceedingly difficult, politically perilous, and institutionally unlikely to change. Not that that stops the opponents of any nomination by this President—and their handmaids in the press—from fomenting hysteria that Judge Barrett’s confirmation has all the signs of the Apocalypse. It was the first question of the first Presidential debate.

The two Republican Senators opposed to pushing through this nomination in an election year are not enough to stop the confirmation process. Moreover, the expected outcry about hypocrisy over the Merrick Garland precedent has been appropriately muted since anyone with a pulse and a brain knows that no Democratic President with a Senate majority would decline to fill a Supreme Court vacancy—or to put it more pointedly—follow the Biden rule, no matter how close the vacancy arose to an election. Several Senators, Harris, Hirono, Schumer, and Blumenthal, have resorted to a huff about an “illegitimate” process, refusing to meet with the nominee. They manage the mean feat of looking both foolish, by abdicating their duty to advise and consent, and petty by a sulk that reminds one of a campus “disinvitation” of a speaker suspected of wrongthink.

Where Does She Stand?

Having spent a great deal of time looking at Judge Barrett’s opinions, legal writings, statements, and other indicia of her likely positions, I have concluded that it is difficult to say with any degree of certainty how she will rule on some of the more pressing issues likely to come before the court. This is partially due to her relatively short tenure on the court, and also the more abstract focus of her academic career. Justices Gorsuch and Kavanaugh, both of whom had larger judicial footprints, have surprised supporters, and that possibility cannot be ruled out with Judge Barrett.

Two cases of great interest to the NCLA, Doe v. Purdue University and Rainsberger v. Benner, deserve special mention. In Doe, Judge Barret stood up for the due process rights of a male student accused of sexual assault on campus, an important current issue given the Department of Education’s notorious “Dear Colleague” letter. Doe vigorously disputed the charge, but the university refused to provide him with the evidence against him, to consider his proffered exculpatory evidence and to interview witnesses—shockingly, even the accuser. Nonetheless, the Title IX officials, some of whom had allegedly not even read the report, deemed the accuser’s second-hand account “more credible.” This was “fundamentally unfair,” Judge Barrett concluded, and fell “short of what even a high school must provide to a student facing a days-long suspension.” Rainsberger involved qualified immunity, the Supreme Court principle that has too often protected public officials from liability for glaring civil rights violations. Mr. Rainsberger had been charged with murdering his elderly mother and spent two months in prison before the charges against him were dropped. He sued the detective who had allegedly knowingly or recklessly made false statements when swearing out the probable cause affidavit. Judge Barret, writing for a unanimous panel, held that because it is clearly established that such deliberately falsified allegations violate the Fourth Amendment, the detective was not entitled to qualified immunity. Both of these decisions demonstrate a deep commitment to protecting Americans’ due process rights and civil liberties.

Judge Barrett shows great craft and seriousness in approaching her work. She is an enthusiastic textualist, diving into complex statutory and legal constructs with bravura, intelligence, and keen interpretive tools. She displays both intellectual heft and an aura of open-mindedness as if she is approaching each case without a preconception of how it will come out. She approaches Social Security judicial review—something that seldom redounds beyond the personal interests of the citizen before her—with the same energy, seriousness, and willingness to question dubious government action as she brings to much larger cases that have come before her.

“His Philosophy Is Mine” and the Structural Constitution

Judge Barrett has said that Justice Scalia’s judicial philosophy is hers, which is reassuring insofar as it commits to originalism and textualism, but it doesn’t necessarily predict a specific outcome—nor should it. Justice Scalia had a mixed record on administrative power, the topic of greatest interest to the New Civil Liberties Alliance, and his opinions on deference and other blights of the administrative state were evolving. Judge Barrett also clerked for Judge Laurence Silberman on the DC Circuit, who is an unrepentant Chevron supporter.

To some extent, this is a generational divide. Judges of a certain age are so used to deferring to administrative agencies, and patterns of unreflective deference have become so deeply ingrained, that it has taken a new generation of scholars, lawyers, and judges to rethink these doctrines—with the benefit of hindsight that commands a more critical view of their consequences. Judge Barrett has neither written nor taught in the tortured field of administrative law, and one can only hope that her relative youth and general open-mindedness—which shines through in her writing—will mean she will look upon these doctrines with a fresh, critical, and unjaded gaze.

Judge Barrett believes it is important to hold principle before personal preference. In a 2017 article published shortly before she went on the bench, she wrote that a “faithful judge resists the temptation to conflate the meaning of the Constitution with the judge’s own political preference.” That means “fidelity to the original public meaning, which serves as a constraint upon judicial decision-making.” Judges must also show humility and guard against “the feeling of infallibility” that too often tempts judges to make, not interpret, law. Ultimately, “the measure of a court is its fair-minded application of the rule of law.”

Her decisions to date mean that we don’t know what she would say about the constitutionally unmoored Consumer Financial Protection Bureau or structural constitutional questions raised by Lucia, Seila Law, or the rethinking of administrative power that animated Liu, that are going to be the Court’s battleground for the next decades. But her insistence on textual support for upholding government power bodes well for these battleground issues. Her brief and uncritical joinder in decisions refusing to challenge Governor Pritzker’s COVID orders can be excused by the poor posture of the claims before her.

One of her early publications, on habeas corpus, shows a deep historical understanding of powers that Congress cannot divest that bodes well for the delegation challenges she is likely to hear if confirmed. The Supreme Court has not meaningfully ruled on non-delegation for decades. Last year’s Gundy decision shimmers with possibilities that a consensus of the court will entertain the doctrine; her article hits all the right notes about powers that Congress may not constitutionally divest.

The area that concerns me most, after a review of her publications and opinions, is her relative inexperience, even lack of sophistication in business law, financial regulation, class action, and mass torts. Judge Barrett did not practice law for long, and neither her academic nor judicial experience to date has exposed her to the complex abuses that have greatly overtaken the docket of the federal courts. Unpacking those cases, understanding the protracted fight to curtail class action abuse, the many legal and constitutional problems with Multi-District Litigation and mass tort distortions of common law doctrines like public nuisance requires an understanding of state and federal constitutional, jurisdictional, statutory, and common law that law professors seldom acquire through teaching. But by all accounts, including her husband’s, “nobody outworks Amy” and none of these areas is beyond the skilled penetration and judicial correction of an outstanding intellect committed to the rule of law and the integrity and vitality of courts’ dispensation of justice.

Fortunately, what shows through in her writing is not only vigorous textualism and an open mind, but also energy and intellectual vitality. The aforementioned care and attention to detail in all her cases, big and small, bode well. The Gospel Luke (16:10), when speaking of the good and faithful servant, notes that “If you are faithful in small things, you can be trusted with larger ones.” This isn’t just a scriptural parable, but a truth about human nature, as noted by many aphorists, ancient and modern, who echo that thought in similar formulations. The takeaway from my recent intense review of Judge Barrett’s publications and judicial decisions is that her willingness to think deeply about the case and the text of the laws before her and provide meaningful judicial review is the necessary, and hopefully sufficient, judicial mindset to set right these serious abuses of the court system and administrative power.