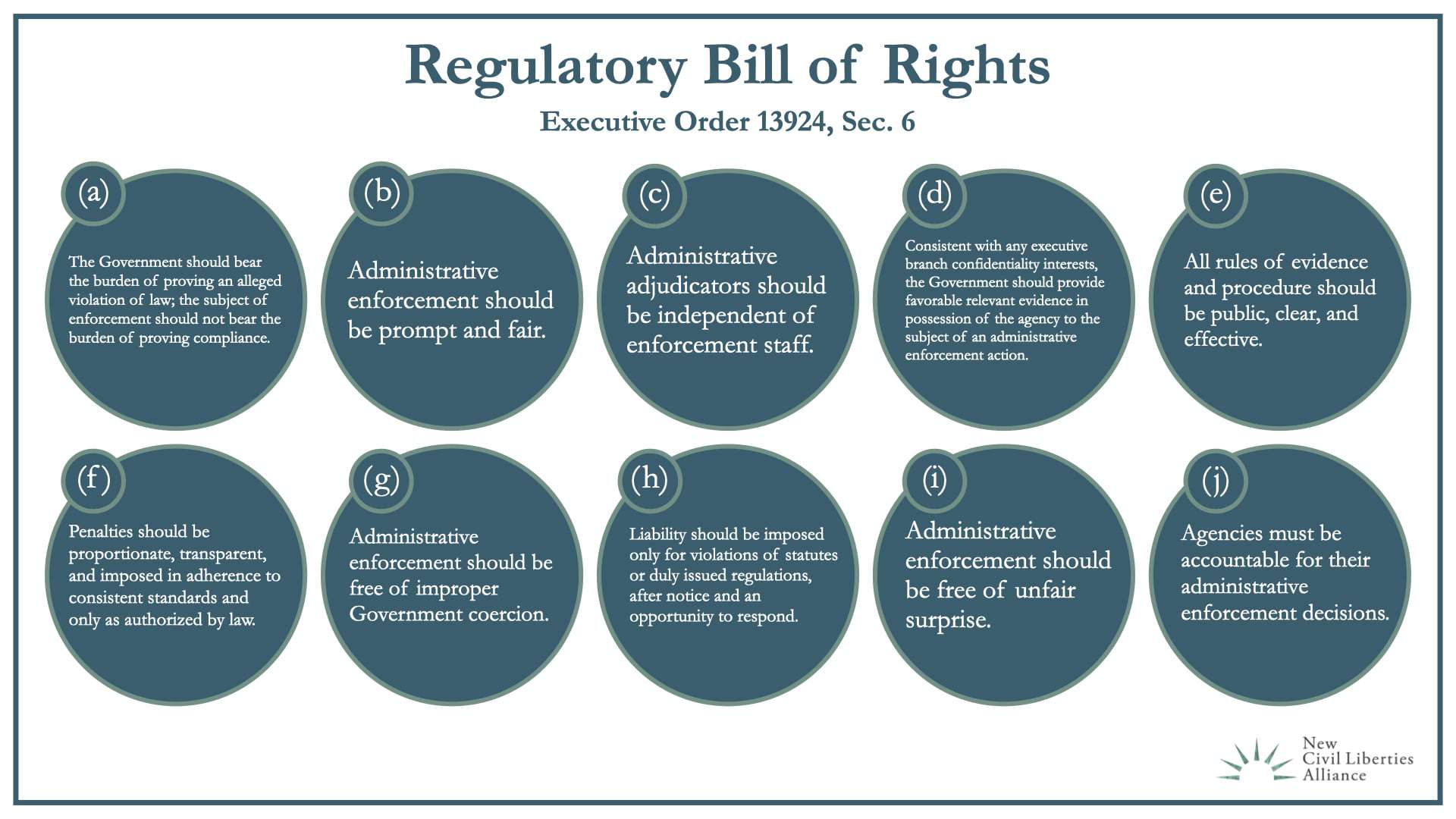 Over the summer I wrote about Executive Order 13924, which attempts to lessen the administrative burdens faced by private individuals and businesses by reining in the administrative state. In addition to directing agencies to rescind, modify, or waive regulations that may hamper economic recovery from the COVID-19 pandemic, section 6 of the Order also acknowledged important principles of fairness in administrative dealings. As I noted in June, many of the principles outlined in section 6 strongly echoed NCLA’s March comments to the Office of Management and Budget (OMB).

To be sure, the principles included in the “Regulatory Bill of Rights” were a welcome advancement for civil liberties, but as with most government actions, they are not without their own shortcomings, and further clarifications are still needed to complement the Order’s nominal protections. In a July post, I highlighted some of the deficiencies with the Order and proposed some solutions to implement the Regulatory Bill of Rights. As I noted, the Order was a positive first step, but this win could only be secured if objective and enforceable limits were put into place.

On August 31, OMB’s Office of Information and Regulatory Affairs (OIRA) issued a memorandum implementing section 6 (M-20-25). The memorandum compiles a “list of best practices” for agencies to consider while they review their existing procedures and develop any necessary revisions. The best practices track with each of the 10 provisions of the Regulatory Bill of Rights.

NCLA is pleased to see that many of our previous recommendations have been included as best practices for the agencies to consider. For example, the memorandum says that agencies should apply limiting principles to the duration of investigations, such as ending an investigation within a defined time. As NCLA noted in our March comment to OMB, agency enforcement processes are necessarily coercive, and that issue is compounded when there is no horizon in sight for the enforcement target.

The memorandum also encourages agencies to disclose exculpatory evidence under the Brady Rule, which NCLA called for in our March comment and a recent comment to the Department of Energy.

The memorandum discourages the use of consent orders, consent decrees, and settlements from barring private parties from discussing their cases. NCLA has been fighting such controversial and unconstitutional gag rules since 2018 when it filed a petition to amend the Securities and Exchange Commission’s (SEC) Gag Rule. Since filing the petition, NCLA has also taken on the case of Barry D. Romeril, the former Xerox Chief Financial Officer, who settled with the SEC over 17 years ago and has been forced into silence ever since. His case is currently pending before the U.S. Court of Appeals for the Second Circuit. In 2019, NCLA also filed a petition to amend the Commodity Futures Trading Commission’s (CFTC) Gag Rule. You can learn more about NCLA’s work fighting Gag Rules here and sign our petition to end Gag Rules.

The memorandum’s best practices also include applying the Rule of Lenity in agency enforcement cases, a welcome change. The Rule of Lenity requires courts to interpret ambiguities in criminal statutes in favor of criminal defendants. In the context, this best practice means that if a statute is ambiguous instead of tipping the scales in favor of the government’s position under Chevron deference, the agency would have to construe the statute in favor of the agency target.  You can read more about NCLA’s work encouraging application of the Rule of Lenity here, here, here, and here.

OIRA’s implementing memorandum provides agencies the roadmap to fairer administrative enforcement and adjudication practices. Now it is on the agencies to follow through and adopt these changes.