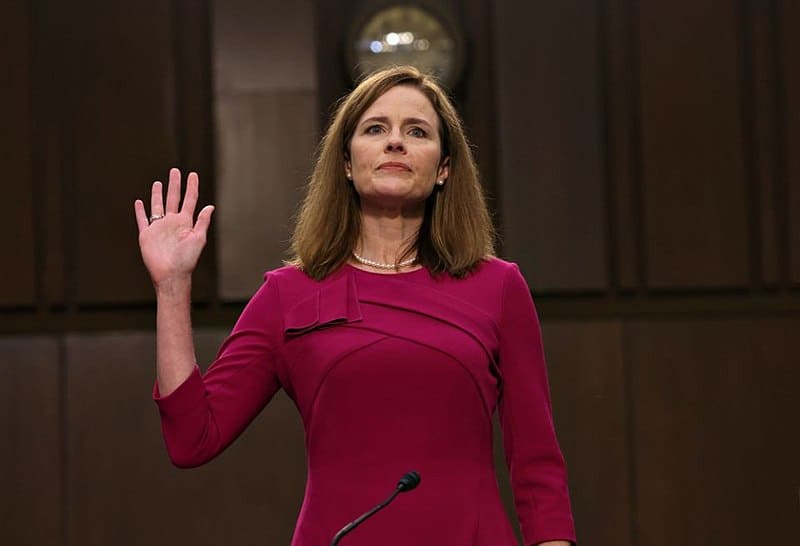 On November 2, 2020, Justice Amy Coney Barrett participated in her first two oral arguments as an Associate Justice of the Supreme Court of the United States. Over the next few decades, she will get to ask incisive questions during oral argument to help her decide cases that will come before the Court.

Only two weeks ago, Judge Barrett gave what we now know as her last job interview. She faced questioners: twenty-two Senators of the Senate Judiciary Committee. The day after Judge Barrett’s committee hearings concluded, the New Civil Liberties Alliance hosted a Lunch and Law event discussing the historic nomination. We discussed how many Senators and media outlets had focused on irrelevant characteristics and not enough on things that matter.

The judge’s approach to judging should matter in confirmation hearings. In terms of successfully figuring out Judge Barrett’s approach to judging, the Committee hearing was unhelpful. Many Senators focused on specific issues such as the Affordable Care Act or Roe v. Wade. Judge Barrett answered that line of questioning the only way she could: because the particular questions might come up in a future case before the Supreme Court, she could not answer the Committee.

Most of the questions, as a result, turned out to be more revealing of the Senators’ failure to obtain meaningful answers than of Judge Barrett’s approach to judging. What type of questions could the Senators have asked to learn more about Judge Barrett as a judge? One model is that followed by Senator Ben Sasse. The 19-odd minutes that Judge Barrett spent answering Senator Sasse’s questions on the third day of the hearing revealed more of her judicial philosophy than most of the remainder of the hearing put together.

Senator Sasse asked general questions to glean Judge Barrett’s understanding of the United States Constitution, the proper role of government, and the nature of individual rights. A few other Senators used this model.

To Senator Sasse’s question about the Ninth Amendment, Judge Barrett answered: “[The Ninth Amendment] is often treated as a rule of interpretation … that the individual’s rights are preserved, that those not expressly granted are not taken away.” Court watchers should take Justice Barrett’s answer seriously when thinking about her approach to unenumerated, as well as enumerated, individual rights.

Judge Barrett called “eloquent” Senator Sasse’s description that the American constitution “flip[s] the historic prohibition assumption” to “a freedom assumption on people and a prohibition assumption on government.” Judge Barrett’s answer tells us that she will likely not be biased in favor of government litigants. Judge Barrett’s dissenting opinion in Cook County v. Wolf, for example, illustrates “the dangers posed by deference doctrines and agency guidance that divert courts from actual interpretation of law.”

The nominee’s judicial methodology will always be more critical to fulfilling the advice-and-consent role than obtaining assurances that the nominee would rule a certain way on particular issues. Judge Barrett was open and forthcoming in elaborating on the former, yet many Senators’ questioning focused on the latter. The Senate’s advice-and-consent role would have been better served if more Senators had viewed the confirmation hearing, not as a platform for their personal campaign speech, but as an opportunity to learn more about Judge Barrett’s views on her role as a judge.

As a judge on the Seventh Circuit, in the decisions that Judge Barrett authored or joined, she has protected people’s due process rights. And she has been skeptical of the power wielded by administrative agencies. NCLA published a more in-depth analysis of her written decisions a few weeks ago.

Legal practitioners will spend a lot of time analyzing Justice Barrett’s questioning during the Supreme Court’s oral arguments and her written opinions for decades to come. And very little would be said about the quality of the Senators’ questioning during the confirmation hearing. Perhaps that is how it should be. But that is not to say that the Committee hearing’s current theatrical format should continue in the future. The Senate itself is aware of the problems plaguing the confirmation process. The Senate’s official account of how the Senate has historically confirmed nominees to vacancies on the Supreme Court shows that the confirmation process has been an inherently political one. That history makes it difficult to derive any rule about how the Senate should fulfill its advice-and-consent role. However, two guideposts are apparent: (1) more focus on the nominee’s views of the Constitution, of individual rights, and the proper role of government, (2) less emphasis on the desire to extract promises on how the nominee will decide particular cases. If the Senate Judiciary Committee were to stay within sight of these guideposts, then future confirmation hearings would be more illuminating as to the nominee’s approach to judging, and at least as noncontroversial and dignified as Judge Barrett’s.