Flattening the Curve on Our Civil Liberties: Are Courts Social Distancing from the Constitution? 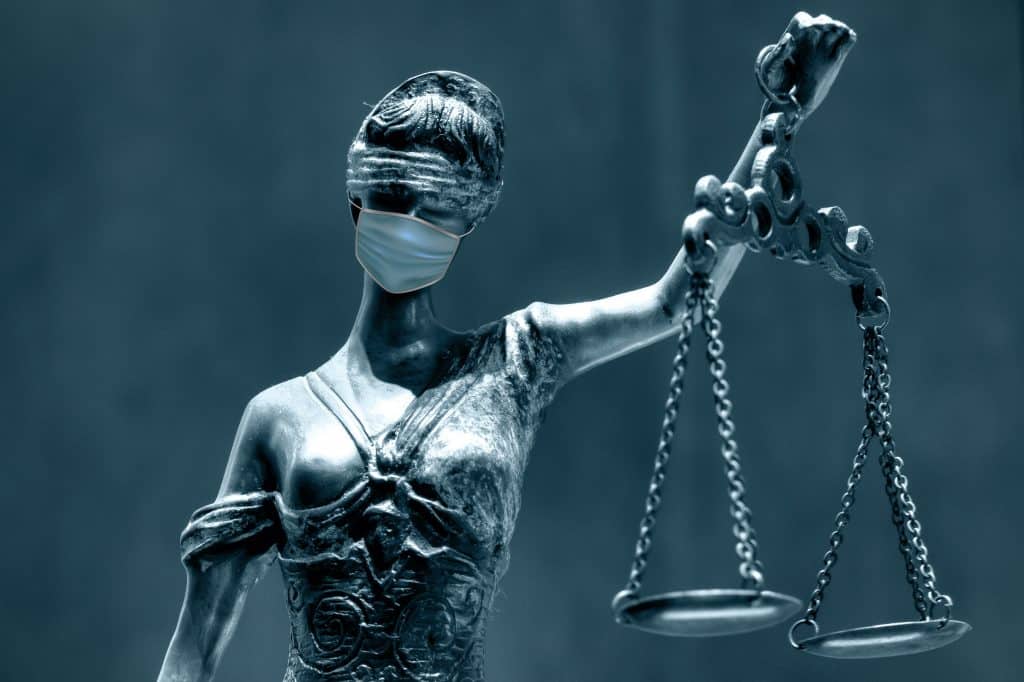 We just observed the first anniversary of “15 days to flatten the curve.” Since then, we’ve learned at least two important lessons. First, there’s no quick fix to flattening an infection curve. Second, the virus may be more resilient than our civil liberties. When all three branches of government are derelict in their duties to protect and defend federal and state constitutions, the curve on our civil liberties gets flattened, not the virus.

COVID-19 is a highly contagious disease that is potentially deadly to the elderly and people with underlying conditions. One year ago, and at times between then and now, the virus threatened to overwhelm the healthcare system. Many states scrambled to find more hospital beds, ventilators, doctors, and nurses. Even personal protective equipment for healthcare professionals and sanitizer were in short supply. Precautionary measures, such as canceling large social gatherings, postponing unnecessary travel, and mask-wearing and physical distancing in public, made sense.

But very few of these public health measures were enacted by state legislatures. Governors took over and made law by executive decree—many of which were enforced with criminal penalties. Most state legislatures were silent on governors’ open and notorious usurpation of their exclusive police power. So, much of the criticism of governments’ handling of the pandemic has fallen on governors for overreaching and legislatures for acquiescing to executive rule.

The courts, however, shouldn’t get a free pass. The judiciary’s role is to say what the law is and to protect and defend federal and state constitutions. Governors can’t permit some people to earn a living while forcing others to collect unemployment. Governors can’t prohibit us from hosting Thanksgiving dinner for more than 10 people, or from serving dessert after 9:30 p.m. Governors can’t open nail salons and casinos while leaving tanning salons and arcades closed. These examples may seem absurd, but they are shockingly commonplace across the country. And despite that they are barefaced affronts to constitutional order and civil liberties, very few courts have reined in these abuses of power.

There have been many court cases challenging COVID-19 executive orders since March 2020. Six cases best summarize both judicial retreat and engagement in the age of executive law-by-decree. While the results are mixed, there is hope on the horizon that courts may be more willing to buoy the Constitution and civil liberties in the second year of the pandemic, than they were in the first.

The Dynamic of the Police Power, Separation of Powers, and Nondelegation Doctrine

To set the stage for the COVID-19 cases, it’s important to understand the constitutional backdrop to all lawsuits against gubernatorial COVID-19 orders. It starts (as it should) with the United States Constitution. The Tenth Amendment states that “[t]he powers not delegated to the United States by the Constitution, nor prohibited by it to the States, are reserved to the States respectively, or to the people.” Thus, since the police power is not an enumerated federal power, states have retained the authority to wield it.

The police power is the authority to regulate the health, safety, welfare, and morals of a community. This definition is consistent across the country. The police power is inherently legislative because it necessarily involves policy making. Examples of the police power include state laws that require clean restaurants, establish the minimum age for a driver’s learning permit, and set the hours of operation for liquor stores. The role of a governor is to implement and enforce these laws. Since COVID-19 is a matter of public health, state legislatures have the primary responsibility for protecting their residents from unreasonable risk of contracting the disease.

Relatedly, the nondelegation doctrine is designed to prevent a branch from voluntarily surrendering its constitutionally vested authority to another branch. Some state legislatures have divested themselves of their policy and lawmaking authority by assigning it to their governors in broad emergency statutes. Just as a governor cannot delegate authority over state law enforcement agencies (a quintessential executive function) to the legislature, a legislature cannot delegate authority to regulate the health, safety, welfare, or morals of the state to a governor.

Gubernatorial overreach and legislative acquiescence are unnecessary to protect the public from COVID-19. In a properly ordered constitutional system, the legislature has tremendous power to protect the public from disease. The key case on this point is Jacobson v. Massachusetts, 197 U.S. 11 (1905). Massachusetts passed a law that required local boards of health to monitor their communities for the spread of smallpox. If they noticed a spike in infections, local boards could petition the Department of Public Health to decide whether vaccinations should be required in the endangered community. In 1905, Cambridge, Massachusetts, posed a serious smallpox threat, so the residents were ordered to be vaccinated. The Supreme Court held that the legislative police power is broad, and that the legislature validly exercised its authority to protect Massachusetts from a disease dangerous to the public health. The Department of Public Health and the Cambridge Board of Health were merely executing the policy established by the legislature since they were only implementing the legislature’s will as described in the statute. Jacobson demonstrates that the branches of state government don’t have to violate the separation of powers or nondelegation doctrine to protect the public health, even in times of crisis.

The Supreme Court decided South Bay Pentecostal in May 2020. The Court held that California Governor Newsom’s executive order limiting church attendance to 25% of the building capacity up to a maximum of 100 attendees, regardless of building size, didn’t violate worshipers’ right to free exercise as guaranteed by the First Amendment. This case is important because Chief Justice Roberts’s concurring opinion reads like a defense of the Court’s decision not to subject executive orders to rigorous constitutional analysis. The Chief Justice stated that where a virus has no effective treatment, no cure, and no vaccine, medical and scientific uncertainty “is a dynamic and fact-intensive matter subject to reasonable disagreement.” He concluded that state officials’ “latitude must be especially broad” in these circumstances, and that officials “should not be subject to second-guessing by an ‘unelected federal judiciary,’ which lacks the background, competence, and expertise to assess public health and is not accountable to the people.”

The Massachusetts Supreme Judicial Court decided Desrosiers in December 2020. The Court held that Massachusetts Governor Baker’s COVID-19 orders did not violate the Massachusetts Constitution’s separation of powers, he did not unconstitutionally “dispense with the law,” and his orders did not violate rights to due process or peaceable assembly. Governor Baker claimed authority to issue his COVID-19 orders pursuant to an emergency statute known as the Civil Defense Act, which prior to COVID-19, had only been used for preparation for war and imminent massive storms. Beyond the court’s unreasonable statutory interpretation regarding the Act’s applicability to pandemics, the court went to great lengths to praise the Governor’s performance in the pandemic and his policies that, in the court’s view, advanced a compelling governmental interest in public health. It concluded that since the legislature wanted the Governor to have plenary authority over suspending the law during a civil defense emergency, the COVID-19 orders don’t violate the separation of powers.

These two cases illustrate the circumstances in which courts might be reluctant to defend the Constitution. In the early stages of a pandemic where there is little information about the nature or severity of a virus, courts might choose to defer to the elected branches over vindicating civil liberties. Also, where a governor may have statutory authority to issue executive orders in emergencies—even emergencies dissimilar to the one at hand—a court might rule on the side of expediency, rather than a constitutions’ structural protections of civil liberties.

There’s Hope for the Future

In McCarthy, a federal court held that Governor Baker’s closure of Massachusetts gun shops because they were not “essential” businesses, violated the Second Amendment. The gun shops had to take measures to prevent the spread of the virus, but they couldn’t be shut down simply because the Governor believed gun shops weren’t essential.

In Butler County, a federal court explained that Pennsylvania Governor Wolf’s COVID-19 orders may have been well-intentioned, but “good intentions toward a laudable end are not alone enough to uphold governmental action against a constitutional challenge.” The court held that COVID-19 orders that restrict First and Fourteenth Amendment rights by setting numerical limits on gatherings and closing “non-life-sustaining” businesses are unconstitutional. “In an emergency, even a vigilant public may let down its guard over its constitutional liberties only to find that liberties, once relinquished, are hard to recoup and that restrictions—while expedient in the face of an emergency situation—may persist long after immediate danger has passed.”

In Midwest Institute of Health, the Michigan Supreme Court held that Governor Whitmer did not have authority under the Emergency Management Act to renew her declaration of a state of emergency after its 28-day expiration. Moreover, a second statute, the Emergency Powers of the Governor Act unconstitutionally delegated the legislature’s plenary police power to the Governor. Addressing the nondelegation doctrine, the court explained that “[o]ne of the settled maxims in constitutional law is, that the power conferred upon the legislature to make laws cannot be delegated by that department to any other body or authority.” So, there was no constitutional basis for the Governor’s COVID-19 orders.

In Diocese of Brooklyn, the United States Supreme Court superseded its decision in South Bay United Pentecostal Church v. Newsom. The Court held that New York Governor Cuomo’s occupancy restrictions on places of worship violated the First Amendment by treating houses of worship more harshly than secular facilities. Justice Gorsuch’s concurring opinion is unequivocal: “[The Supreme Court] may not shelter in place when the Constitution is under attack. Things never go well when we do.” Justice Gorsuch flatly rejected the notion that courts should defer to elected branches during the pandemic emergency, and certainly not 10 months into the emergency. “Even if the Constitution has taken a holiday during this pandemic, it cannot become a sabbatical.” He also insisted that courts must stop citing South Bay Pentecostal and start defending civil liberties. Nevertheless, courts persist in citing South Bay Pentecostal instead of Diocese of Brooklyn, including the Massachusetts Supreme Judicial Court in Desrosiers v. Baker.

It may appear that courts are more willing to defend the Constitution where the issue is discrete, such as the Second Amendment in McCarthy or the First Amendment in Diocese of Brooklyn. But Butler County and Midwest Institute of Health demonstrate that some judges are willing to take a wide-angle view of the separation of powers and assignment of the legislative police power to the executive branch. The dividing line could simply be time—one year into the pandemic, it’s becoming clearer to judges that governors aren’t in any rush to relinquish their emergency power. But the difference could simply be the individual predisposition of judges. Some know that the best way to simultaneously protect the health, safety, and welfare for all people is to defend the Constitution. Others may be more deferential to those holding elected office.

Judicial intervention during emergencies may be inconvenient, but it’s the courts’ constitutional duty. Constitutional order is most needed in crisis because it’s in heady times that a fearful population becomes reactive to danger and complacent in the denial of civil liberties—whether the denial is personal or felt by their neighbors. While these six cases are illustrative of the state of pandemic law currently, judgments vary widely.

At NCLA, we will continue to press the judiciary to play its essential role in reinforcing constitutional structures and vindicating civil liberties where the political branches have imperiled them. Social distancing is effective at limiting the spread of a virus. But when courts social distance themselves from the constitutions that they have sworn to protect and defend, it’s also effective at limiting the spread of liberty.

We can’t afford to let the government flatten the curve on our civil liberties any further.