Lunch and Law: The Administrative State – Reagan, Trump, and Biden 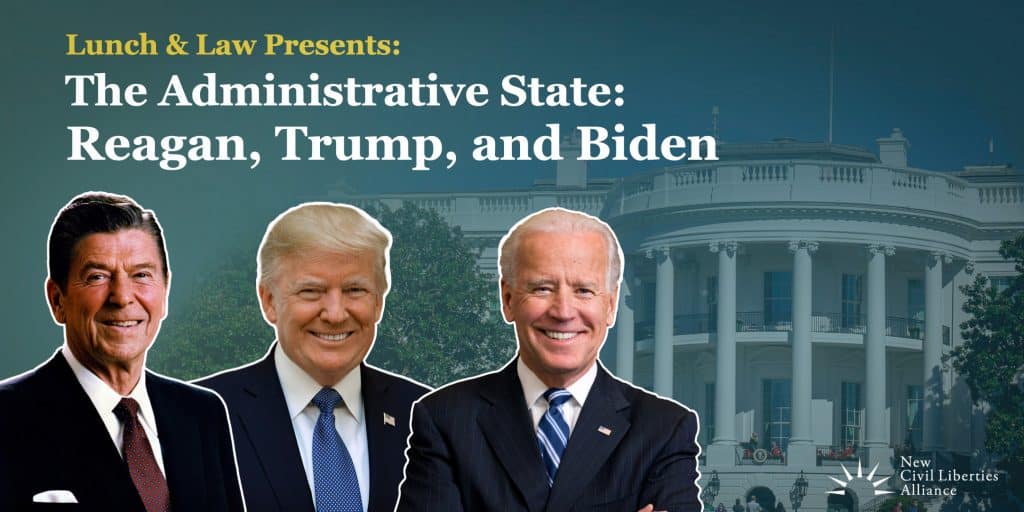 In April we celebrate Earth Day. Appropriately, this month NCLA invited distinguished guest panelist William Perry Pendley, who served as Deputy Director of the Bureau of Land Management (BLM) for Policy and Programs, to sit down with NCLA Senior Litigation Counsel Harriet Hageman for our monthly Lunch and Law panel series, “The Administrative State – Reagan, Trump, and Biden.” Pendley’s passionate discussion included his long history dealing with the Administrative State, how things have changed since his days in the Reagan Administration, what it was like to serve under former President Trump, and what the future holds with the Biden Administration’s regulatory overreach.

William Perry Pendley spent over 30 years working in the federal government. In the Reagan Administration, he served as the Deputy Assistant Secretary for Energy and Minerals in the Department of the Interior (DOI). In 2019, he was selected by President Trump to be Deputy Director of the Bureau of Land Management Policy and Programs at DOI. In his capacity as a leader in an agency dedicated to regulating the development of public lands, including oil and gas development, Pendley has seen firsthand the Administrative State in action.

“Somethings don’t change,” explained Pendley, referencing that over the course of his time in Washington from the Reagan Administration to the Trump Administration, some agencies have been chronically mired in bureaucratic red tape. “A lot of our challenges in getting things through the Administrative State were getting things through [the Office of Management and Budget] (OMB)…The Department of Justice was also always a problem.” Pendley described the issue facing many agencies as a deep-rooted attitude that favored delay. “It takes forever to get anything done. I’m not saying there was an attempt to stonewall. That’s just the natural way, the process you have to go through…in a bureaucracy, there’s always tomorrow, there’s always next week, there’s always next month.” In Pendley’s view, there was no sense of urgency in government.

President Reagan once said that the nine most terrifying words in the English language are, “I’m from the Government and I’m here to help.” Pendley described Reagan as a president who firmly believed in smaller government and limited agency power. “Reagan knew the federal government; he had to deal with it as Governor of California,” said Pendley. “He came to Washington committed to doing something about it.” President Reagan, like Pendley, also brought a unique perspective as not only a westerner but as a proud advocate for policies that help and support westerners.

President Trump, by contrast, was from Queens, New York. Pendley was initially skeptical of President Trump’s commitment to the western states, the issue portfolio of BLM, and the battle against an ever-growing Administrative State. But according to Pendley, President Trump was able to quickly assuage his concerns. President Trump nominated Neil Gorsuch, the first Tenth Circuit judge to ascend to the Supreme Court, ensuring a western perspective at the highest level in the judiciary. Then, President Trump pardoned the Hammond family, originally prosecuted under the Antiterrorism and Effective Death Penalty Act of 1996 during the Obama Administration for setting a fire on their property that grew out of control and damaged federal land. For Pendley, these two acts established President Trump as a supporter of pro-western policies.

Pendley explained that many of President Trump’s most impactful victories came through joint work with BLM, including establishing energy independence, developing strategic mineral resources, reducing fuel loads to prevent wildfires, and rolling back regulations and the environment review process for BLM projects. Additionally, under Pendley’s management, BLM was able to hold record-setting lease sales of public land for energy and mineral projects vital to both the economic and national security interests of the U.S.

While President Reagan and President Trump differed on policy related to public lands, their views on pushing back against an increasingly bureaucratic Administrative State were in alignment. According to Pendley, the same cannot be said for President Biden. The new administration is trying to undo many of President Trump’s accomplishments. “Vice President Biden and Senator Harris lied during the 2020 Presidential Campaign,” Pendley said. “Biden said during the debates that I am a union man, and I won’t get rid of fracking. The first thing they do out of the chutes is kill the Keystone Pipeline.” Pendley also described the move to policies that are related to combatting climate change. “Then there’s the shift to renewables. We supported renewables; we greenlit many large renewable projects. But if you’re going to fly on jet aircraft, you’re going to need fossil fuels, and if you want to drive your car, you’re going to need fossil fuels.”

When talking about how to battle against the executive overreach in the Biden Administration, Pendley ended with a few words. “Candidly Biden and Harris have an issues agenda that is in conflict with the American people, but particularly the people in the West…It’s very important in these early days to establish some victories over the lawlessness of the Biden Administration…People are very frightened and discouraged but when they see victories in court that limit this abuse; that’s very positive.”

You can catch past Lunch and Law events and sign up to receive alerts on future ones here.