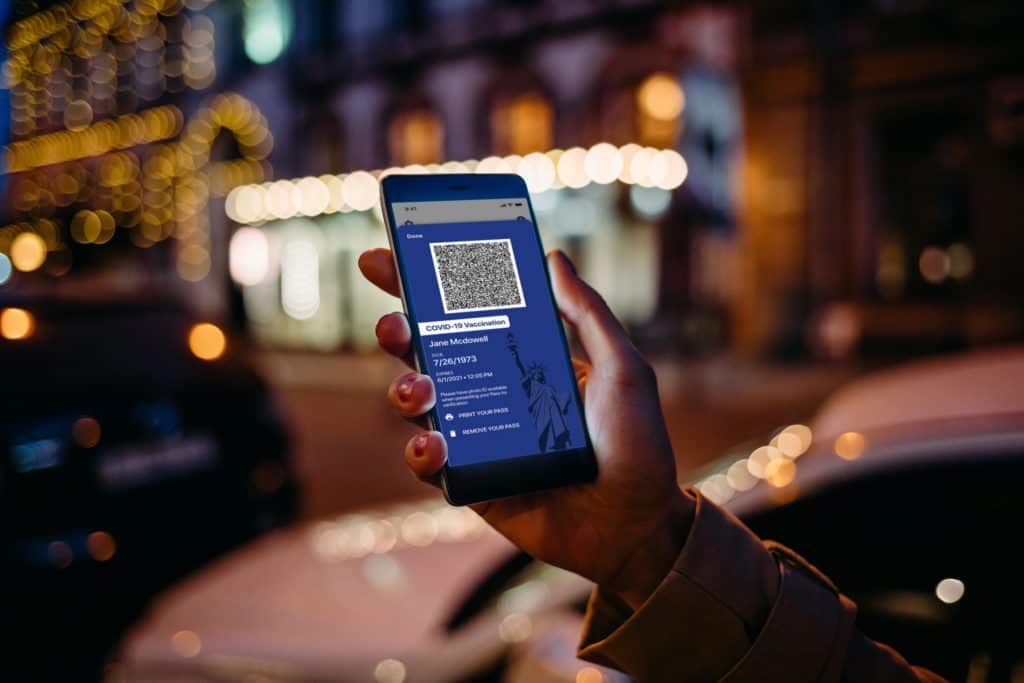 At the end of March 2021, New York Governor Andrew Cuomo announced that he was launching the nation’s only Vaccine Passport Program. In order to gain entry to venues that host large-scale events, including sports stadiums and concert halls, people must scan proof that they have had a COVID-19 vaccine or recently tested negative for the virus. Medium-sized venues—for instance, those that host performing arts or catered events—can operate at increased capacity if they require patrons to submit such evidence. Although the Governor repeats the word “voluntary” ad nauseum when describing the program, New Yorkers should not be fooled. The Program is anything but voluntary: New Yorkers are deprived of their basic constitutional rights if they do not participate.

Initially, the Governor does not have the authority to instate the Vaccine Passport Program. Weeks before the program commenced, the New York legislature rescinded the emergency powers it had granted the Governor a year prior authorizing him to unilaterally issue directives to mitigate the spread of the coronavirus. Noting that the state had entered the “possibly waning days of the pandemic,” the Legislature explained that “it is time to restore the pre-pandemic balance of power of the governor and legislature.” But in typical Cuomo fashion, the Governor circumvented the constitutional separation of powers and imposed invasive directives on the people of New York with zero legislative oversight.

The Program would not pass constitutional muster even if the Governor had implemented it through the proper channels. Both the First Amendment to the U.S. Constitution and Article I § 9 of New York’s Constitution guarantee individuals the right to assemble. Cuomo, and his Vaccine Passport Program, reframes that right as a privilege, demonstrating an utter lack of regard for constitutional rights, which are not fair-weather privileges to be bestowed and confiscated at the Governor’s discretion.

Various statements make yet more evident that the Governor lacks basic knowledge of the rights and freedoms enshrined in the Bill of Rights. He has declared, for instance, “if you’re unvaccinated, that’s your choice, but you can’t go into the Radio City Music Hall with vaccinated people” and that “if you are vaccinated, there are more opportunities for you. You’re going to see venues opening up with vaccinated sections and unvaccinated sections. And you’re going to have more of a chance to participate in activities and resume life.” No matter how many times the Governor reiterates that the program is “voluntary,” these remarks constitute further evidence that the Vaccine Passport Program is the antithesis of what it purports to be.

Cuomo’s dystopian program also infringes upon New Yorkers’ rights to be free from unreasonable searches and seizures under the Fourth Amendment of the federal constitution and Article I § 12 of the state constitution. Numerous courts have recognized that people have a reasonable expectation of privacy in their medical records, meaning that the Governor cannot compel them to divulge such information in order to participate in public life. And while the Governor has claimed that the Vaccine Passport Program “has nothing to do with government,” the state is obviously coercing businesses into implementing the program and using private actors to do what it cannot. That makes this state action, implicating the Fourth Amendment and state equivalent.

The Governor appears unaware of or unconcerned with the fact that the COVID-19 vaccines have been approved only pursuant to an Emergency Use Authorization (EUA). In granting authorization for emergency use, the FDA concluded that the known benefits outweigh the known risks after a few months of clinical trials. The standard is much higher for medical products to receive full FDA approval. In order to obtain such approval, a vaccine must be rigorously tested and monitored for an extended time period. Crucially, the EUA statute mandates that potential recipients be informed of the risks and benefits and that they have the option to accept or refuse the treatment. The coercive nature of Cuomo’s Vaccine Passport Program unequivocally flies in the face of the language and spirit of the EUA statute. The Supremacy Clause of the U.S. Constitution establishes that federal laws are “supreme” and preempt conflicting state laws. Since the Vaccine Passport Program contravenes the federal EUA statute, it does not withstand constitutional scrutiny.

Governor Cuomo’s authoritarian tendencies have been on full display for the past 15 months, and nothing exemplifies that reality more than his Vaccine Passport Program. The Governor is under the mistaken impression that he can control the lives and personal health decisions of millions of New Yorkers and that the best way to do so is coercing them into receiving a vaccine. In the long run, though, these measures are likely to backfire, as they almost certainly will manifest in a breakdown in trust between the public and authorities. But Cuomo is far too power-hungry to consider the implications of his actions—fostering opposition to public health efforts and expediting the derogation of our core civil liberties. So far, New Yorkers are letting him get away with it.