Giving Hope to All: Adorning and Preserving Lincoln’s Apple of Gold 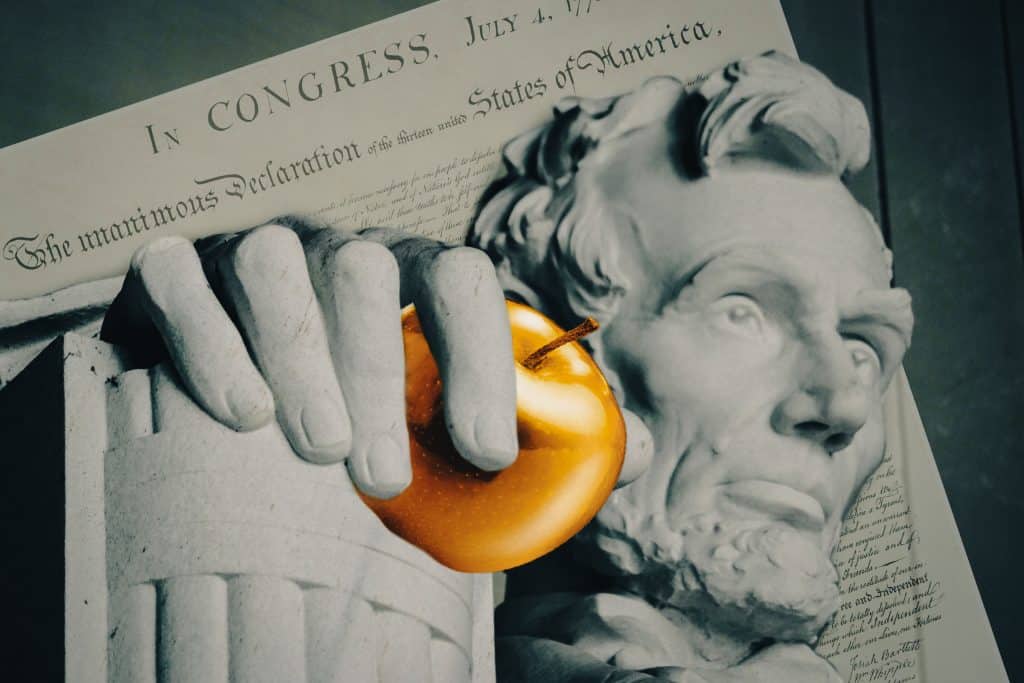 Abraham Lincoln explained it this way:

All of this is not the result of accident. It has a philosophical cause. Without the Constitution and the Union, we could not have attained the result; but even these, are not the primary cause of our great prosperity. There is something back of these, entwining itself more closely about the human heart. That something, is the principle of “Liberty to all”—the principle that clears the path for all—gives hope to all—and, by consequence, enterprize, and industry to all.

The expression of that principle, in our Declaration of Independence, was most happy, and fortunate. Without this, as well as with it, we could have declared our independence of Great Britain; but without it, we could not, I think, have secured our free government, and consequent prosperity. No oppressed, people will fight, and endure, as our fathers did, without the promise of something better, than a mere change of masters.

So let us act, that neither picture, or apple shall ever be blurred, or bruised or broken. That we may so act, we must study, and understand the points of danger.

— Abraham Lincoln, Fragment on the Constitution and Union, (Jan. 1861) (emphasis in original).

Were it not written 140 years before blogs were invented, Lincoln’s Fragment would easily be the greatest blog post, ever. Lincoln artfully described the nexus between the Declaration (the apple of gold) which articulates a principle upon which the American nation was founded and the Constitution (the silver frame adorning the apple of gold) which is the practical attempt to achieve the Declaration’s ideals through a free government.

The Frame Adorns and Preserves the Apple

Three months prior to his 1861 inauguration, President-elect Abraham Lincoln exchanged letters with Alexander H. Stephens, a former member of the U.S. House of Representatives from Georgia. They discussed diffusing the growing tensions between North and South. Stephens, in fact, was just one month away from his own inauguration—as Vice President of the Confederate States of America. Asking Lincoln to allay southern concerns about possible Union military intervention, Stephens paraphrased Proverbs 25:11: “A word fitly spoken by you now would be like ‘apples of gold in pictures of silver.’”

Inspired by Stephens’s Biblical reference, Lincoln wrote Fragment on the Constitution and Union. Lincoln explained that the United States could have declared independence for any number of reasons. But the Founders chose to establish the American nation on one principle: liberty to all. Four years earlier, in a speech denouncing the Supreme Court’s Dred Scott decision (now widely viewed as one of the worst Supreme Court rulings in history), Lincoln excoriated the Court’s debasing of the Declaration and Constitution, but also offered words of hope:

[The Founders] meant to set up a standard maxim for free society, which should be familiar to all, and revered by all; constantly looked to, constantly labored for, and even though never perfectly attained, constantly approximated, and thereby constantly spreading and deepening its influence, and augmenting the happiness and value of life to all people of all colors everywhere. The assertion that “all men are created equal” was of no practical use in effecting our separation from Great Britain; and it was placed in the Declaration, nor for that, but for future use. Its authors meant it to be, thank God, it is now proving itself, a stumbling block to those who in after times might seek to turn a free people back into the hateful paths of despotism.

Lincoln recognized that America’s liberty-to-all principle is not self-executing. Popular sovereignty is, at best, predisposed to desultory progress toward universal liberty. Historically, unbridled popular sovereignty had shown itself more likely to extinguish liberty, rather than advance it. Separation of powers, the nondelegation doctrine, and other structural features of the Constitution exist to facilitate America’s attempt to self-actualize by simultaneously effectuating the will of the majority while protecting minority viewpoints from marginalization or extinction. Adherence to the Constitution’s structural provisions, therefore, is not important for the Constitution’s sake, it’s important for the principle’s sake. But without the Constitution, it would be very unlikely that we could ever attain the Declaration’s liberty-to-all principle. This is the existential nexus between constitutional order and civil liberties.

Understanding the Points of Danger to Give Hope to All

Lincoln ends Fragment with a call to action. He implored us to ensure that neither the frame nor the apple “ever be blurred, or bruised or broken.” He directed that “we must study, and understand the points of danger.” History has shown that the most significant point of danger is that not everyone appreciates that our individual civil liberties are interconnected. When the California Attorney General says that he wants charities’ donor lists, for example, that’s not just a right to privacy concern of wealthy donors, it’s all of our rights to privacy in our associations that are at risk—social, political, religious, philosophical, and economic. And although it may appear that demanding presidential control over the Consumer Financial Protection Bureau’s (CFPB) operations and congressional control over its appropriations only impacts regulated parties, these separation of powers and nondelegation doctrine violations deny all of us fundamental bulwarks meant to secure our liberty.

It’s the Declaration’s liberty-to-all principle that “clears the path for all—gives hope to all—and, by consequence, enterprize, and industry to all.” To do our part to advance the principle, we must unite to oppose all deprivations of civil liberties and all violations of the Constitution’s structure. In other words, to give hope to all, it’s our duty to keep the tarnish remover at the ready, and to put the shine back on the frame of silver adorning our apple of gold, whenever—and wherever—it’s needed.