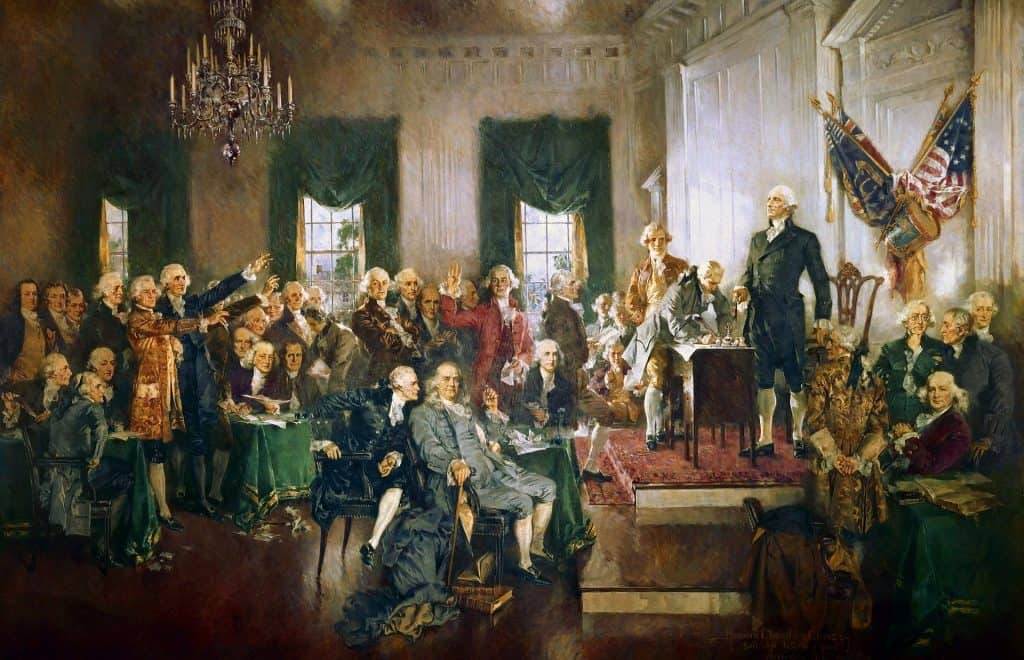 A few readers have asked very interesting questions about the post that deserve answers. First and foremost, why must today’s Americans—living more than two centuries after the Constitutional Convention—interpret the Constitution as the Framers interpreted it? For instance, since the Framers couldn’t foresee the need for specialization and technical expertise in the modern age, can’t the Constitution accommodate Congress’s transfer of some of its lawmaking authority to experts in executive branch agencies? What gives the Framers the right to bind Americans in perpetuity, anyway?

The answers to these questions lie at the multidisciplinary intersection of political science, political philosophy, and constitutional law: Constitutional systems bind their founding generation to each succeeding generation with words to prevent arbitrary governmental power, to protect minorities, and to secure process and justice for all.

Constitutionalism is a system within which a political community establishes fundamental law founded on the twin pillars of process and justice. To ensure process and justice, the fundamental law circumscribes governmental power. Constitutions achieve this with enabling rules, such as Article I, § 1’s commandment that “[a]ll legislative Powers herein granted shall be vested in a Congress of the United States[,]” and limiting rules, such as the First Amendment’s admonition that “Congress shall make no law respecting an establishment of religion.” Citizens in a constitutional system bind each other to constitutional rules to guard against the temptation of rapacious elites and capricious majorities to enhance their privilege at the expense of minorities, and to guard against the allure of circumventing constitutional procedure in favor of political expediency.

By choosing to use a constitution to achieve universal liberty, the Framers bound themselves to future generations through the language and process they used to write and promulgate America’s fundamental law. This is the reciprocity principle of constitutionalism—the Framers were not free to do whatever they pleased. Among other things, the Framers were required to craft structural limitations on governmental power, institutionalize due process to prevent abuse of power, provide for judicial review, provide for a supermajority constitutional amendment process, and guarantee the informed and articulated consent of the governed in the Constitution’s promulgation.

The common law has long held that where predecessor generations grant rights and privileges to successor generations, predecessors may bind successors with obligations. But this isn’t the only source of legitimacy for the Framers’ choices regarding the character and function of the fundamental law and our duty to stay true to it. The reciprocal relationship that connects the founding generation to all future generations is an essential dynamic of legitimate and effective constitutional systems. It wasn’t just the right of the Framers to bind future Americans, it was their duty.

“All legislative Powers herein granted shall be vested in a Congress of the United States[,]” therefore, must mean all legislative powers. Where Congress divests itself of its constitutional duty to make law by delegating that authority to executive branch administrative agencies, it acts in a manner that is not only unconstitutional as a matter of law, it also undermines the constitutional system and threatens America’s constituting aspiration of universal liberty. The other branches compound this problem where they enable this constitutional affront, such as where courts defer to administrative agencies’ interpretations of agencies’ statutory mandates and jurisdiction. The judicial branch relies on the Constitution’s words and constitutionalism’s principles to legitimize its authority to interpret the Constitution. But judicial bias, such as that found in Chevron and other deference doctrines, prevents those very same constitutional words and constitutionalist principles from insulating the fundamental law from fickle majoritarian preferences expressed through the political branches.

I’m left with two questions of my own. In the year 2261, will Americans enjoy the liberty protections inherent in a constitutional system, or will they be subjected to capricious rule? What will that generation think about our current superintendence of the Constitution and its structural bulwarks protecting civil liberties?

The Constitution’s words can’t have multiple meanings because such arbitrariness is antithetical to process and justice. Neither the Framers nor their Constitution is perfect, but the Constitution can be (and has been) amended. Each American generation, therefore, can choose to become Framers. But we can’t reframe the Constitution by executive, legislative, or judicial fiat. As the original Framers weren’t free to impose arbitrary government on succeeding American generations, our generation isn’t free to impose arbitrary government on our successors by manipulating the meaning of the Constitution’s words. So, let’s dedicate ourselves to restoring and maintaining the constitutional system to achieve universal liberty for ourselves and all future generations. They will be as grateful to us as we are to the founding generation.