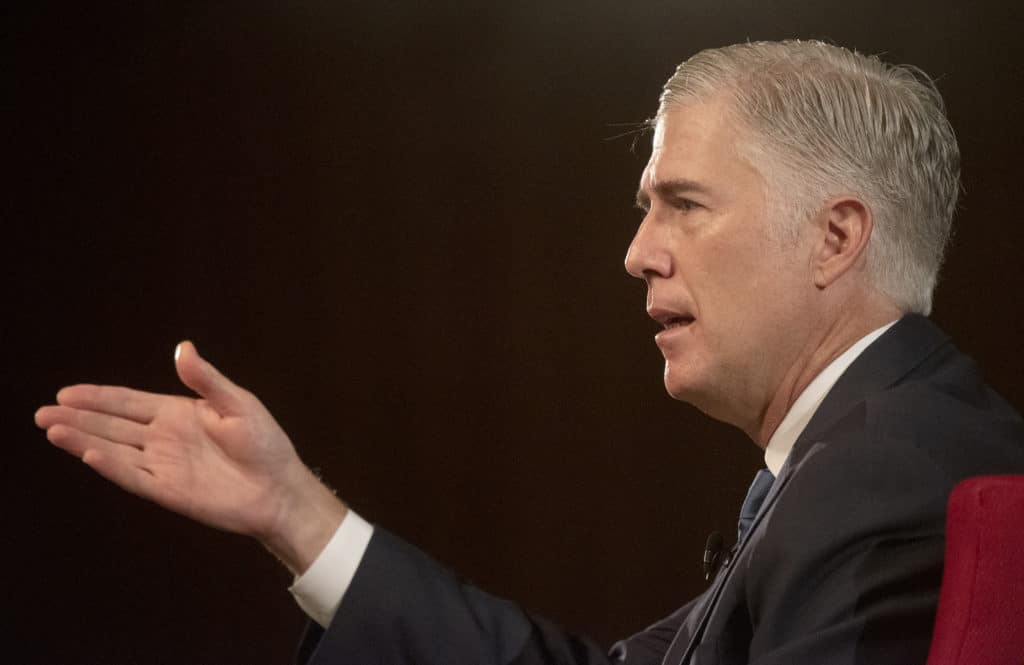 In its decision earlier this month in Wooden v. United States, 142 S. Ct. 1063 (2022), the Supreme Court had little difficulty rejecting the Solicitor General’s expansive interpretation of the Armed Career Criminal Act (ACCA). That statute mandates a 15-year minimum sentence for felons who violate firearms-possession bans and who have at least three prior convictions for specified felonies “committed on occasions different from one another.” The defendant, William Wooden, had been convicted of ten burglaries committed seriatim; he broke into a one-building storage facility and stole items from ten different storage units. The Court ruled unanimously that the ten burglaries were not “committed on occasions different from one another” and thus that Wooden should not have been sentenced under the ACCA.

But the justices could not agree on a single rationale for their decision. Justice Kagan’s majority opinion adopted a textualist approach; she applied various interpretive canons to conclude that the word “occasion” may (as here) “encompass a number of non-simultaneous activities; it need not be confined to a single one.” She held that Wooden undertook his criminal activity on a single occasion, explaining that he “committed his burglaries on a single night, in a single uninterrupted course of conduct.” Justice Gorsuch’s opinion concurring in the judgment, joined in substantial part by Justice Sotomayor, sharply disagreed with Justice Kagan’s approach; he would have invoked a substantive canon—the rule of lenity—to overturn Wooden’s conviction. Justice Barrett (joined by Justice Thomas) wrote separately to note their disagreement with some of the evidence that Justice Kagan relied on in interpreting the statute. And Justice Kavanaugh wrote separately to take issue with Justice Gorsuch’s opinion; he opined that the rule of lenity should play at most a minor role in construing criminal statutes.

Justice Gorsuch’s opinion is particularly interesting. He has forcefully argued in past opinions in support of textualism and the “duty” of judges “say what the law is.” But his Wooden opinion not only voices full-throated support for the rule of lenity (a rule that some textualists have shied away from because it does not purport to discern the “best” interpretation of the statutory language at issue) but also criticizes Justice Kagan’s opinion for failing to articulate a rule of decision that will provide clear guidance in future ACCA cases.

His criticism suggests a healthy understanding of textualism’s modest goals. While textualism represents a significant improvement over approaches to statutory construction that prevailed in mid-twentieth-century federal courts (when judges routinely interpreted statutory language based on their views regarding the statute’s general purpose), it has never claimed that ordinary canons of statutory construction can uncover a “best” reading of every statute. Congress not infrequently drafts statutes that are genuinely ambiguous with respect to an issue that comes before a court. Under those circumstances, Justice Gorsuch suggests, courts should not attempt to read too much into the statutory language in an effort to discern Congress’s precise meaning. Rather, courts should decide such cases by applying substantive rules of statutory construction that possess significant historical and constitutional pedigree—such as the rule of lenity.

Gorsuch’s Critique of the Majority Opinion

Rejecting the appeals court’s imposition of a 15-year ACCA sentence was the easy part of the Supreme Court’s task. The Sixth Circuit had adopted a bright-line rule declaring that felonies are committed on “different” occasions so long as there exists a discrete point in time between completion of the first offense and the start of the second. No one on the Court thought the Sixth Circuit’s approach was a plausible interpretation of the statute; if one first assaults another patron in a bar by landing a right hook and thereafter assaults him again with a left uppercut, no English speaker would say that the punches were thrown on different occasions. But the Court ran into trouble when it attempted to craft a rule to assist lower courts in determining just how separated in time and place two events must be before they can be described as having been “committed on occasions different from one another.”

The majority directed lower courts to employ a “multi-factored” balancing test in which “a range of factors may be relevant” in determining whether two crimes are sufficiently separated by time or intervening events to be deemed to have occurred on “different” occasions. But Justice Gorsuch discerned little practical value in that test; he observed: “Multifactor balancing tests of this sort … have supplied notoriously little guidance in many other contexts, and there is little reason to think one might fare any better here.” And given the Court’s inability to construct a test that will permit lower courts to apply the ACCA “Occasions Clause” fairly and consistently in future cases, the only fair conclusion is that the clause is genuinely ambiguous in many of its applications.

Justice Gorsuch supplied numerous hypotheticals whose outcomes could not accurately be predicted under the majority’s test. For example, he hypothesized:

[A]n individual who commits a robbery or burglary then later assaults a pursuing police officer: Does the latter assault happen on a separate “occasion” from the initial crime? The times, locations, and crimes differ, but they are related in certain respects too. Unsurprisingly, the courts of appeals have disagreed in cases like these.

142 S. Ct. at 1080. Justice Kagan responded that the Court did not need to worry about harder cases because they were not before the Court; but she did not explain what plausible reason there was for the Court to hear the case if the result would be an opinion that will provide a rule of decision in no cases other than Wooden’s.

The Rule of Lenity

Justice Gorsuch’s alternative approach? He would apply the rule of lenity to hold in Wooden’s favor. The rule of lenity is a centuries-old canon of statutory construction holding that “ambiguity concerning the ambit of criminal statutes should be resolved in favor of lenity.” Skilling v. United States, 561 U.S. 358, 410 (2010).

Neither the text nor context of the ACCA indicates Congress intended that ambiguities in the statute should be resolved in favor of the criminal defendant. But Justice Gorsuch argued that because of the rule of lenity’s historical pedigree and its grounding in constitutional right—he noted that American courts have invoked the rule since the 18th century as “a means of upholding the Constitution’s commitments to due process and the separation of powers”—it should provide the rule of decision in this and many other Occasions Clause cases. He argued that resort to the rule of lenity is warranted because the Occasions Clause is genuinely ambiguous—it “supplies little guidance, does not define its key term, and the word it does use (‘occasions’) can lead different people to different intuitions about the same set of facts.”

At first blush, Justice Gorsuch’s opinion might be thought inconsistent with his previously expressed support for textualism—which posits that a statute’s meaning should be derived primarily from the ordinary meaning of its text. Some textualists are extremely reluctant to apply the rule of lenity or any other substantive interpretive canon. They would tell Justice Gorsuch to try harder to discern the Occasions Clause’s precise meaning (by applying every possible interpretive tool) before declaring the clause ambiguous. That was the gist of Justice Kavanaugh’s concurring opinion; he argued that “the rule of lenity rarely if ever comes into play,” because “as in other contexts, hard interpretive conundrums, even relating to complex rules, can often be solved.”

Justice Kavanaugh is wise to remind judges that they should not abandon the interpretive process prematurely. But Justice Gorsuch’s approach is truer to the original understanding of textualism. When, as here, the disputed statute employs vague language that reasonable readers can interpret differently in a wide variety of factual scenarios, judges have no choice but to turn elsewhere to arrive at a rule of decision. Textualism’s strongest supporters, including Justice Scalia, always recognized that there are limits on the ability of ordinary tools of statutory construction to divine the one best interpretation of a statute as applied to all factual situations, particularly given that competing tools on occasion pull in opposite directions and that some of those tools are not universally accepted. For example, Justice Kagan felt compelled to cite extensively to legislative history in arriving at her statutory interpretation; Justice Barrett (joined by Justice Thomas) disagreed with both her characterization of and her use of legislative history and thus declined to join that portion of the majority opinion.

Over-reliance on tools of construction in cases in which the “best” statutory interpretation is far from clear can end up obscuring underlying policy preferences that are driving the court’s decision. It is better that the judge states openly why he prefers one interpretation of a seemingly ambiguous statute—such as citing the rule of lenity’s dictate that all reasonable doubts concerning its meaning ought to operate in favor of a criminal defendant.

When To Apply Substantive Canons

This is not to suggest that courts should feel free to rely on just any canon of statutory construction that does not purport to interpret the actual statutory language (so-called “substantive” canons). As Justice Gorsuch explained, the rule of lenity, despite its status as a substantive canon, is a legitimately employed interpretive tool because of its lengthy historical pedigree and its tendency to reinforce important constitutional principles. He stated, “From the start, lenity has played an important role in realizing a distinctly American version of the rule of law—one that seeks to ensure people are never punished for violating just-so rules concocted after the fact, or rules with no more claim to democratic provenance than a judge’s surmise about legislative intentions.”

Other substantive canons lacking the same pedigree have far weaker claims to judicial acceptance. Topping the list of questionable canons is Chevron deference—the claim that courts, when construing a statute, ought to defer to the construction adopted by a federal agency charged with administering the statute. The Supreme Court invented that deference rule less than 40 years ago, and there is no empirical evidence supporting the claim that when Congress adopts a statute, it generally intends that courts should accept reasonable statutory interpretations adopted by the agency administering the statute. Chevron deference cannot be squared with textualist theory. The Court’s failure to cite the Chevron decision in Wooden is unsurprising—particularly given the Court’s repeated assertions that “criminal laws are for courts, not the Government, to construe.” Abramski v. United States, 573 U.S. 169, 191 (2014).