A Farmer, An Irrigation Ditch, and the Environmental Protection Agency: What Could Possibly Go Wrong? 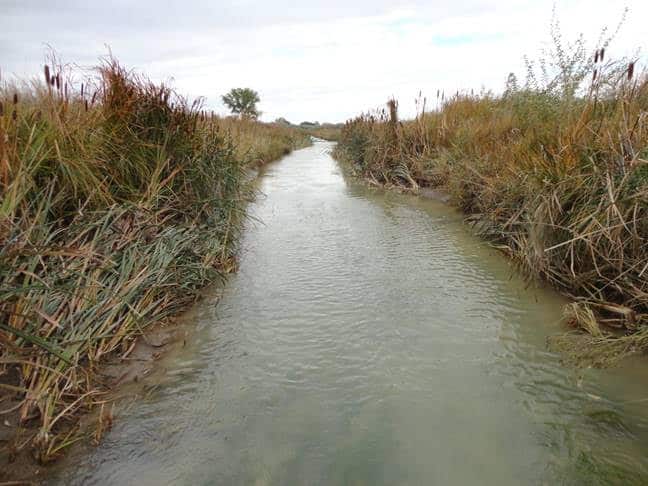 David Hamilton is an engineer by training and colorful by nature.  He likes to build things and has spent his adult life creating successful natural gas processing companies and utilities in two states, as well as buying and improving farms around his hometown of Worland, Wyoming.  He is a self-taught artist, painting beautiful landscapes, portraits, and flowers (a talent that seems to contrast with his rough-hewn character).  He is an independent problem-solver and it would never occur to him that it would be necessary to ask the federal government for permission to reconstruct or maintain an irrigation ditch on his own private property.

David purchased a run-down and abused patch of farm ground on the east edge of Worland in 2005 and immediately began to clean up the mess left by decades of neglect.  This property was split into two parcels by a draw locally referred to as “Slick Creek,” named for “Slick Nard,” an assassin who killed and robbed a traveling sheep herder in that particular gulch in 1895 (a person brought to justice pursuant to an early version of “tire-track forensic analysis,” being identified by the hoof of his horse:  “the imprint of which was plainly left in the gulch”). When David purchased the farm, Slick Creek was no longer a dry gulch, having been converted to an irrigation ditch and incorporated into the Hanover Irrigation District canal system in 1906 to regulate the flow of irrigation water to area farmers.

The Irrigation District had been using Slick Creek to manage irrigation water for almost 100 years by the time that David purchased this property, with such use having caused substantial erosion across the farm.  His predecessors had tried to control the erosion with “poor-man’s rip rap” including using abandoned farming equipment, cars, trucks, refrigerators, washing machines, and fencing materials to shore up the area and maintain some semblance of a defined channel for conveying irrigation water. David fixed all of that, removing and properly disposing of the abandoned equipment, surveying in and rebuilding the banks and floor of the ditch, restoring a beautiful and productive farm, creating an environmental paradise, and spending over $300,000 in the process.

The Environmental Protection Agency (EPA) and Corps of Engineers (COE) are tasked with implementing the Clean Water Act (CWA), including the 404-permitting program, which applies to “navigable waters of the United States.” The EPA is notorious for pushing the outer boundaries of jurisdiction under the Act, with the Supreme Court in. Rapanos v. United States, noting the “immense expansion” of federal regulation of land use that has occurred under the CWA in the last forty years “without any change in the governing statute.”  The EPA and COE have, for example, identified storm drains, roadside ditches, ripples of sand that may contain water once a year, and desert washes as “navigable waters of the United States” all in order to restrict private and public land use under the auspices of the CWA.  They have used the 404-permitting process to either outright reject projects, to delay them indefinitely, or to make them so cost-prohibitive that they are no longer viable.  The Supreme Court reported in Rapanos that the average applicant for a 404 permit spends 788 days and $271,596 in completing the process.

Importantly, normal farming and ranching activities and the construction and maintenance of irrigation ditches are statutorily exempt from regulation under the CWA.  David’s project, in other words was not—by definition—covered by the Act.  Those statutory constraints, however, did not stop the EPA and COE from springing into action once they learned of David’s farm restoration work.  They decided that suing a farmer in northern Wyoming would provide yet another opportunity to expand the scope and jurisdiction of the CWA and, in the process, further federalize water rights administration and irrigation district management (the regulation of which belongs to the states).

The EPA filed a lawsuit against David in the Fall of 2010, claiming that he had violated the CWA by failing to obtain a 404 permit from the COE to construct and maintain the Slick Creek irrigation ditch across his property.  The timing in that regard—just shy of five years after he completed the project—allowed the EPA to seek the maximum penalty ($37,500 per day) for the longest period, despite the fact that the COE had learned of David’s work in 2006.  By the early Spring of 2013, David was facing penalties under the CWA of almost $62,000,000 (yes, you read that correctly).  The expert witnesses hired by the EPA to testify against David (former EPA/COE employees of course) eventually determined that he had disturbed a total of 2.1 acres of his own private property (equating to a potential penalty of $29,523,809 per linear acre).

David knew that the Slick Creek irrigation ditch was not a “navigable water of the United States” and that he was entitled to construct and maintain the irrigation ditch across his property without obtaining a 404 permit.  He chose to go to trial—to let a “jury of his peers” decide whether he had violated the CWA.  Before he could present his case, however, the EPA had several more heavy-handed cards to play.  It sought—and received—an order from the federal district court blocking evidence of the environmental benefits of his project (including reduced sedimentation, improved water quality and management, removal and proper disposal of old equipment/appliances, revegetated channel, erosion control, reduction in fertilizer demand, proper placement of stabilizing riprap, and improved wildlife habitat).  The EPA fought all efforts to show the jury a photograph of the finished project—for which David had been sued and for which he was facing bankruptcy—for fear that they would see the beauty of his work and the improvements made. David was prohibited from cross-examining the EPA official who made the decision to sue him, thereby preventing him from exposing the fact that this was a test case to expand the scope of the CWA (e.g., using a water “quality” statute to regulate water “quantity”) to allow the EPA and COE to control irrigation districts and facilities.

After a two-week trial the jury took less than two hours to conclude that David had not violated the CWA, that Slick Creek was an irrigation ditch, and that the area in question had been historically farmed and grazed as part of a “normal framing and ranching operation.”  The EPA never appealed that verdict, recognizing that the Tenth Circuit Court of Appeals would most likely affirm the jury’s decision.  The federal government’s post-trial focus was on preventing David from recouping any portion of the $1,000,000 he had spent defending himself over the previous six years.

The Hamilton case is important for many reasons.  First, it exposes how relentless federal agencies have become in expanding their jurisdiction despite unambiguous statutory constraints.  Second, it is extremely difficult for the average person to defend against the federal government, with standard notions of due process being undermined by the court’s willingness to “defer” to agency interpretation and arguments about what evidence should be considered “relevant.”  Third, it exposes the near totalitarian power that is inherent in granting agencies the authority to impose bone-crushing penalties against American citizens, forcing landowners to settle or risk bankruptcy.  Finally, it shows that federalizing natural resource management creates absurd results, with protecting the environment becoming secondary, while agencies look to fill their coffers and force landowners to jump through hoops for no rational reason.

The NCLA is dedicated to protecting private property rights and fighting agency overreach to ensure that no one else is treated the way that the federal government treated David Hamilton.