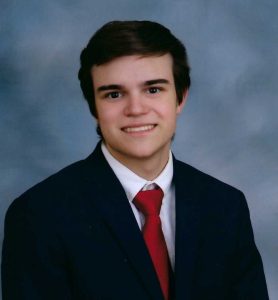 What were your duties as an NCLA intern?

As the Engagement intern, I was tasked with getting the ideas behind the firm out there to the public. My first project was developing a database of names and addresses for the federal judges for a package on Chevron Deference NCLA was mailing out. Since then, I’ve worked on numerous projects, including research on Chevron deference and multiple projects creating media to engage people with the ideas of the firm.

What did you most enjoy about your internship?

The thing I enjoyed the most was the sheer amount of learning that I was able to do. I was expecting to come into this internship and just do brunt work, but I ended up learning so much about Administrative Law. As someone in my undergrad, listening in on calls with the clerks from some of the most important speakers was a privilege. I also loved the times I would go into Clegg’s office and engage in uphill debates I had no business entertaining and getting completely destroyed, but learning where in the argument I let him win. When I exit NCLA, those experiences are the ones that I am going to learn the most from, and as a result, I will become a much better student.

What interesting thing(s) did you learn about Administrative Law?

Working at NCLA, you get a real taste about a lot of Administrative Law. The first thing I ever learned was what exactly Chevron Deference was. This idea that judges willingly gave up their right to interpret the Constitution granted under Marbury v Madison to the executive branch was completely foreign to me. My understanding of the success of the Constitution – the ideas that went into it, like separation of powers, the human nature of selfishness and lust for power – was completely challenged by the courts willingly giving up power to another branch of the government. I later learned that it wasn’t just the courts who gave up this power, but Congress, too. For every 1 bill passed by Congress over the past decade, 28 regulations were rolled out by executive agencies, taking advantage of Congress’ willingness to make unpopular laws in fear of losing elections. Seeing the true concentration of power in the executive agencies we have in this country is something that I never would have expected to see, but thanks to my time here at NCLA, I know better now. In addition to the abdication of power and concentration of it in the executive agencies, I learned about how these agencies make rules, prosecute these rules, and have their own administrative judges to adjudicate based on these laws. Most people do not know about this, and most won’t unless they fall victim to this 3-in-1 tyrannical package administrative agencies deliver. I learned how little administrative agencies care about our due process rights, instead giving a biased hearing to defendants who enter the hearing without any chance to win. Finally, I learned that despite all of these things pointing towards a pessimistic worldview, firms like NCLA can provide us optimism, fighting for things like the Nondelegation Doctrine, the 5th Amendment, and our dear separation of powers. With firms like NCLA fighting for the right, there is hope for the future that we can return to a time where the Constitution actually matters to executive agencies again.

How might you use what you’ve learned later in your professional career?

NCLA offered a ton of educational opportunities to the interns. We learned a ton of things like how to use FOIA during discovery, how to argue for individual exceptions under the Free Exercise Clause, the depth of agency regulation, and more. These lessons will be extraordinarily important for me in the future if I become a lawyer. I also learned a lot about my writing and how I can write more effectively, which is incredible advice I look forward to using in my future career.

Any advice for other students who want to intern at NCLA in the future?

If you are on the fence about whether or not to intern at NCLA, do it. Coming out of my first year of my undergrad, I had very low expectations for the internship I was going to try and get. NCLA took those expectations, shattered them, and gave me one of the most fun summers of my entire life. I got to explore the city of Washington, meet a ton of like-minded individuals in the office, and contribute to an incredible cause. If you ever get the opportunity to work for a special place like this, take advantage of that opportunity. I’d take that opportunity again in a heartbeat.

Back to Meet Our Interns