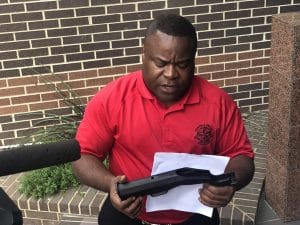 Washington, D.C. — The New Civil Liberties Alliance (NCLA) filed a lawsuit in the U.S. District Court for the Western District of Texas, Austin Division, against the  Bureau of Alcohol, Tobacco, Firearms and Explosives (ATF). The case seeks to overturn the federal ban on bump stocks and to halt its enforcement. NCLA contends that only Congress, not an administrative agency like the ATF, can write criminal laws such as the ban on
bump stocks.

NCLA represents Austin, Texas resident and gun enthusiast Michael Cargill. Mr. Cargill surrendered two bump stocks this afternoon at the Austin ATF Field Office in accordance with the ban. Whether bump stocks should be outlawed is a question that Congress must address. Only Congress— and not an administrative agency—has the power to ban these devices. NCLA believes the ATF did not act lawfully in issuing the ban.

On March 21, 2019, the U.S. Court of Appeals for the Tenth Circuit issued a temporary stay of the bump stock ban that applies to another NCLA client, W. Clark Aposhian, a resident of Salt Lake City, Utah, who has challenged the ban in federal court. The stay prevents the enforcement of the bump stock ban against Mr. Aposhian while the court considers his Emergency Motion for Preliminary Injunction Pending Appeal.

“Administrative agencies may not rewrite a law that Congress passed. Yet that is what the ATF and DOJ have done with the bump stock rule. The ban perverts the rule of law and upends our constitutional system.”—Steve Simpson, NCLA Senior Litigation Counsel

“Two different federal Courts of Appeals have ordered the ATF to halt its bump stock rule against legal challengers. Today, rather than abide by an order the ATF had no right to issue, Mr. Cargill will be joining those efforts to resist this unlawful rule.” –Caleb Kruckenberg, NCLA Litigation Counsel

ABOUT NCLA
NCLA is a nonprofit civil rights organization founded by prominent legal scholar Philip Hamburger to protect constitutional freedoms from violations by the administrative state. NCLA’s public-interest litigation and other pro bono advocacy strive to tame the unchecked power of state and federal agencies and to foster a new civil liberties movement that will help restore Americans’ fundamental rights. For more information visit us online: NCLAlegal.org.