NCLA Video Shows Problem with Use of License Plate Readers

Washington, D.C. – Today the New Civil Liberties Alliance released a case video featuring NCLA client Raul Mas Canosa that depicts the serious privacy concerns that surround automatic license plate readers (ALPRs). Canosa’s lawsuit against the City of Coral Gables, Florida, the Florida Department of State and the Florida Department of Law Enforcement challenges the unconstitutional use of ALPRs to track drivers’ movements without probable cause. NCLA argues that the city’s ALPRs violate Florida law and Floridian’s Fourth Amendment rights to privacy under the U.S. Constitution. The video shows how this technology in the hands of government can be dangerous. 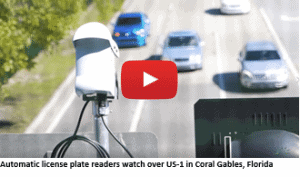 “I reached out to the New Civil Liberties Alliance because I realized quite frankly that my own government—the city of Coral Gables—is spying on me 24 hours a day, 7 days a week, 365 days a year, day and night. And I think that is wrong.”—Raul Mas Canosa, NCLA client

“The constitution (of both the United States, and in this case, the state of Florida) is very clear, government can’t follow you around and record your movements when you haven’t done anything wrong. We’re asking this court to prevent the City from operating its system without reasonable and constitutionally appropriate limits.”
—Caleb Kruckenberg, NCLA Litigation Counsel

“We took this case to defend our client’s civil liberties and to set an important precedent about automatic license plate readers and how they can and can’t be used. Part of your privacy, part of liberty, is being able to say [to the government], ‘It’s none of your business.’ But if the government has a record of everywhere they have traveled in the city, then that right is really empty.”
—Mark Chenoweth, NCLA Executive Director and General Counsel