The Orange River Seen ‘Round the World – Will the EPA Finally be Held Accountable? 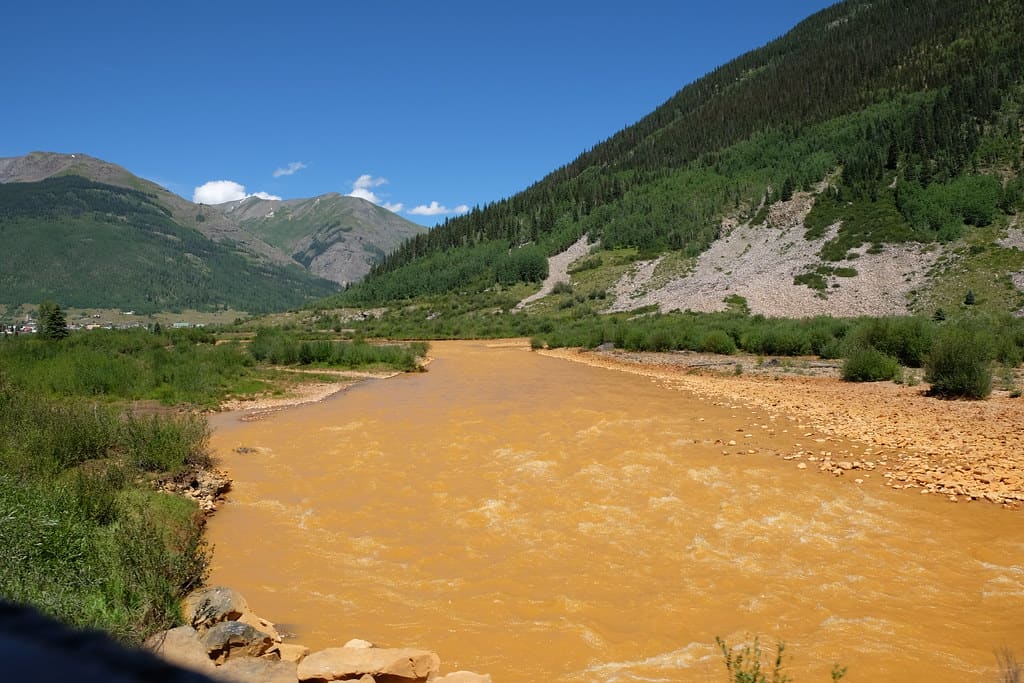 The headwaters of the Animas River begin in the San Juan Mountains of southwestern Colorado. The confluence of streams—Mineral Creek, Cement Creek, and the Upper Animas—define the Upper Animas River basin. The river basin contains hundreds of inactive or abandoned mines. Among them is the Gold King Mine, located on the slope of Bonita Peak. The Gold King Mine was discovered in 1887 and contains numerous workings on seven levels ranging from 11,440 feet to 12,300 feet above sea level.

On August 5, 2015, the EPA, through its contractor, used an excavator to dig away tons of rock and debris that sealed the portal of the Gold King Mine. By breaching the collapsed portal of the Gold King Mine, the EPA released a toxic sludge of over three million (3,000,000) gallons of acid mine drainage and 880,000 pounds of heavy metals into the Animas River watershed in San Juan County in southwestern Colorado. EPA was well aware of the fact that the Gold King Mine was filled with highly acidic and metal-laced water, as both Colorado’s records and EPA’s own work plan highlighted the risk of a significant blowout if workers attempted to dig away the blockage.

EPA had initially gained access to the Gold King Mine in 2008 through an agreement with Mr. Hennis. When EPA sought to renew the agreement in late 2010, however, Mr. Hennis refused based on his concern that EPA would create a “pollution disaster.” Rather than work with him to allay his concerns, the EPA chose instead to serve him with an “Administrative Order Directing Compliance with Request for Access” and threatened him with fines upwards of $37,500 per day if he did not allow them onto his property as demanded. Facing bone-crushing fines, Mr. Hennis was forced to accede to EPA’s demand.

EPA had considered drilling into the Gold King Mine from above in order to directly measure the water level before beginning any excavation work at the entrance. Had EPA simply followed this common practice—and its own precedent—it would have discovered that the Gold King Mine contained a vast quantity of highly pressurized water. A hydraulic pressure test would have confirmed that it was unsafe to remove the backfill (sealing the portal) and that EPA needed to take additional precautions to prevent an “excavation-induced failure.”

Hays Griswold was the EPA official in charge of the Gold King Mine on August 5, 2015. Mr. Griswold arrived at the work site on the morning of August 4, 2015. With an incomplete safety plan, an inadequate site evaluation, and lacking the necessary equipment on hand, he instructed the EPA crew to begin digging at the adit around mid-morning. By the end of the day the crew had excavated all but a small portion of a drainage pipe that had been installed in 2009. The following day, on August 5, 2015, the EPA excavated and removed the last remnants of such pipe. The EPA crew then resumed digging at the mouth of the adit, when the equipment operator soon reported hitting a “spring.” The EPA crew neither attempted to backfill the adit nor otherwise act to stop the water from flowing out of the Mine. Within minutes, the flow surged, culminating in the massive blowout of the Gold King Mine. It was ultimately determined that the work crew had not hit a “spring” at all, but instead had breached the Gold King Mine portal, creating one of the worst environmental disasters in U.S. history by triggering a massive release of pollutants onto the private property below the Gold King Mine (owned by Mr. Hennis) and into the waterways downstream.

EPA’s actions released a massive sickly yellow/orange plume of contamination from the Gold King Mine. The waters and sludge they released cascaded down the embankment outside of the Gold King Mine, rushed down the mountainside, and quickly overwhelmed Cement Creek, a tributary of the Animas River. This plume of contaminated water, often referred to as “the orange river seen ‘round the world,” then snaked down the Animas through Colorado and into New Mexico, to the confluence with the San Juan River. It traveled through New Mexico, the Navajo Nation, and Utah, reaching Lake Powell one week later.

Shortly after EPA caused the Gold King Mine blowout in August 2015, Mr. Hennis verbally authorized the Government to temporarily use a portion of the Gladstone Property for an emergency staging area for equipment and supplies. Mr. Hennis did not grant EPA permission to construct a water treatment facility on his property. Mr. Hennis specifically instructed EPA personnel that they were prohibited from using the Herbert Placer portion of the Gladstone Property for its remediation and clean-up operations.

Ignoring Mr. Hennis’s instructions, EPA constructed a $2.3 million-dollar water treatment facility and related infrastructure on the Herbert Placer portion of the Gladstone Property. EPA completed construction of this facility in November 2015. Since November 2015, EPA has continuously operated the water treatment plant that it constructed on Mr. Hennis’s property. The EPA’s water treatment operations involve the storage of mine waste, solids, and other contaminants on such property. EPA has never compensated Mr. Hennis for the use of his property or to store such waste.

The United States has incurred well over $44,500,000 in past response costs related to the environmental catastrophe that it created when it destroyed the Gold King Mine portal. The Government has estimated that it will incur an additional $20.7 million in future response costs at this site. None of those costs include compensating Plaintiff for the invasion, occupancy, use and physical taking of his property.

In November 2020, EPA demanded that Mr. Hennis sign an eight-year “Consent for Access to Property” agreement. Mr. Hennis refused, instead agreeing to extend such access only up to February 28, 2021, in the hopes that EPA would finally negotiate in good faith to pay for the past and future use of his property. EPA responded in January 2021 by serving him with an “Administrative Order Directing Compliance with Request for Access,” which required him to grant EPA “entry and access” to the Gladstone Property, and to “refrain from interfering with access to the Gladstone Property or with other activities conducted within the scope of this Order….” The January Administrative Order required him to provide access to and use of his property or face a civil enforcement proceeding through which EPA would seek penalties of $59,017 per day for any period of time during which EPA concludes that he is not complying with its demands.

In August 2021, Mr. Hennis filed suit against the United States Government in the Court of Federal Claims alleging an unconstitutional takings in violation of the Fifth Amendment to the United States Constitution. He is seeking a minimum of almost $800,000 for past lease payments, as well as $3,000,000 for a permanent takings, plus interest.

True to form, the United States immediately filed a motion to dismiss Mr. Hennis’s Complaint, arguing alternatively that (1) “the contractor did it,” (2) Mr. Hennis gave permission to use his property (after being threatened with fines of $37,500 per day), and/or (3) that the EPA was forced to construct a water treatment facility on his property to deal with the emergency that it created by blowing out the Gold King Mine in the first place.

Judge Bonilla’s decision is a welcome development in this long saga, and one that portends that perhaps – just perhaps – Mr. Hennis will finally receive just compensation as required by the United States Constitution when the government takes private property for public benefit.